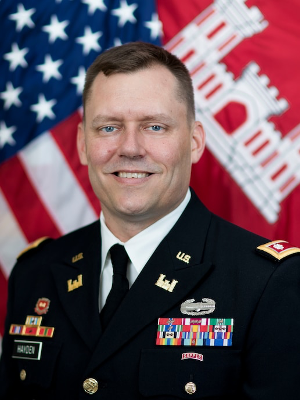 Chair and Professor of Military Science

Daniel Hayden is joining the Military Science Department as Chair and Professor of Military Science. Lt. Col. Hayden is a U.S. Army Engineer officer who has served in a variety of command and staff positions from platoon leader to battalion executive officer. He completed five combat deployments throughout his career having served twice in Iraq and three times in Afghanistan with duties ranging from facilities engineer to battalion operations officer. Originally from Fall River, Massachusetts, he received his commission through the ROTC program at the University of Massachusetts-Amherst with a degree in Political Science. He holds a Master of Science degree in Geology and Geophysics from the University of Missouri at Rolla and a Master of Military Art and Science in Military History degree from the U.S. Army Command and General Staff College. His awards and decorations include three Bronze Star Medals, four Meritorious Service Medals, three Army Commendation Medals, two Army Achievement Medals, the Combat Action Badge, and the Sapper Tab.