The discovery of how a bacteria kills males

Students working closely with professors is a cherished hallmark of CMC, and a significant draw for incoming students. Opportunities to collaborate, present, and even publish are experiences you’d expect at the graduate level, not as an undergrad.

The paper was published last month by PLOS ONE, an international, peer-reviewed online publication that accepts reports on primary research from multiple scientific disciplines.

“This is a good example of synergy between teamwork of very talented students, a faculty member who loves the science, and a really fascinating, unanswered question that has been hanging around for some time,” says Ferree. “And there are many such opportunities for our students who work with our faculty in Keck, on real-life scientific questions that have never been tackled before. It gives the students the possibility of making a significant mark on science and history." 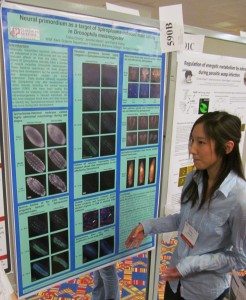 According to Ferree, the paper tackles a bizarre phenomenon that is seen in many different arthropods (which includes insects and crustaceans): male killing by bacterial symbionts.

“These bacteria live inside the cells of the insect hosts, and are passed along from infected mothers to their progeny (just as we humans get our mitochondria organelles solely from mom).

“But the strange thing is, these bacteria (formally known as Spiroplasma) kill nearly all of the male progeny,” Ferree continues. “The reason they do this is likely because killing male progeny gives benefits, such as extra food, to the female progeny, which can then propagate or spread the infection to their future progeny.”

“These are very significant findings because they represent one of the first (maybe the first) demonstrations of a bacterial symbiont directly affecting a specific tissue to induce such an effect on its host,” Ferree says. “This work really helps us to start thinking about male killing at the molecular level.”

We tracked down the recently graduated Trisha Chong in Hawaii, where she plans to apply to graduate school. Right now, Chong is working for Eyegenix at Cellular Bioengineering Inc., a company developing a biosynthetic corneal transplant.

How did you come to be involved in the research project and coauthoring the article?

Trisha: Mainly through my previous experiences working with professor Ferree. I had been his teaching assistant and had also assisted with a few other experiments in his lab before starting research on the male-killing bacteria, Spiroplasma. In my junior year of college I applied for a Bechtel Foundation Fellowship that allowed me to spend the summer conducting research in his lab. I continued to research Spiroplasma in fruit flies as a two-semester senior thesis. I was originally interested in this project because there is relatively little known about Spiroplasma.

How important is being included in such a research project, and publishing an article, for an undergraduate?

Trisha: I would suggest being involved in research as an undergrad to students in all fields and pursuing all professions, because research requires problem solving. There were multiple instances during the project where I had to troubleshoot failed experiments or interpret unexpected results. There were also instances where professor Ferree mentioned a concept or experimental method that I was not familiar with. In these instances, he was very helpful at explaining. But I also had the responsibility of consulting the literature or taking the time to figure out the concept for myself. I believe that problem solving is a skill required of professionals in almost any field. The fact that my research was published is just an added benefit.

Was your published paper particularly important before grad school? Was this “feather in your cap” a real boon when applying?

Trisha: The benefit of being published before applying to graduate school is that schools know that you are already familiar with the type of thinking, time, and effort that goes into publishable research. This is valuable information because graduate students in research programs spend most of their time doing research. Conducting research is a completely different experience from taking classes, even lab-based classes. If a student has contributed to published research, schools will know you are willing to put time and energy into a project you are passionate about. Another benefit is that in interviews, or while networking with other scientists, I can talk about the male killing phenomenon and explain, for instance, why we decided to focus on the nervous system as the target tissue, and how we were able to rule out other tissue types. This not only gives me a topic that I feel interested and confident in talking about, but it can also give people something unique to remember me by. For graduate schools that have many applicants, students who have been involved in specific research projects are more likely to be remembered.

What was the collaboration process like with professor Ferree?

Trisha: I was very fortunate that he was not a professor who just gave me experiments to do. Along with conducting them, I also helped in the brainstorming. I was also fortunate because professor Ferree arranged the project so that Jennifer Martin (the other co-author) and I got to work on separate topics that were both included in the article. She focused on nervous system defects in embryos, while I focused on morphological defects in males that survived to larvae. This was an ideal arrangement because we were not doing exactly the same research, but we could consult with each other. When we started our research at the beginning of the summer, professor Ferree had a hypothetical outline of the questions we would answer, and the experiments we would perform in order to get those answers. He even anticipated the answers we would get, knowing that his outline may have to drastically change at any point in the project—and it did several times. However, as I learned, it is sometimes better to have to change a well thought out plan, than set out with an undeveloped plan. After every experiment we either interpreted our results or tried to figure out why the experiment failed. We then adjusted the outline of the entire project accordingly. Sometimes my ideas were implausible, and professor Ferree would explain to me why that was the case. And on occasion, I mentioned an idea that he hadn’t yet considered. Once the school year started, and everyone got busier with classes, we had meetings once a week to discuss our progress. Jennifer and I often consulted with him during free moments, too, throughout the rest of the week.

How did you split the co-authorship chores?

Trisha: From a macroscopic perspective, professor Ferree did most of the experimental design and writing that went into the article, while Jennifer and I did most of the conducting of the experiments. However, all three of us were involved to some extent in all aspects of creating the article. Jennifer and I were involved in every step of the writing and editing process. We helped assemble the references used in the article, and gave input on drafts from the first outline to the finished product. Professor Ferree also helped out in the lab. One of my research contributions required finding rare males from infected mothers that survived to larvae, in order to compare their morphology to males from uninfected mothers. Because these survivor males are so rare (less than 1 percent), professor Ferree helped me search through hundreds of vials for them. He also was vital in helping Jennifer and I troubleshoot our failed experiments, and helped propagate fly lines or collect embryos when Jennifer’s or my schedule made it difficult to do these tasks."

“In the big picture, CMC is known for its excellence in government and economics, among other things,” says Feree. “But Trisha is a great example of the CMC students who are also excellent in the sciences. Trisha, like several of my former CMC thesis students, will go on to a strong graduate school or medical school, in part because of her dedication and interest in the research opportunities here in our department.   “It is a rare treat,” he says, “to work with undergraduates who see their projects to completion, whose work is of the quality that stands up to strong peer review by other scientists and is accepted into a journal like PLOS ONE.”

The W.M. Keck Science Department is the interdisciplinary home to all biology, chemistry, environmental science, neuroscience, and physics faculty for Claremont McKenna, Pitzer, and Scripps colleges.  The department is administered cooperatively and is housed within an 81,000-square-foot Center, located at the intersection of the three colleges.  The department offers more than a dozen discrete degree options, including dual-degree programs in partnership with schools of engineering and majors in conjunction with disciplines outside the sciences.  The W.M. Keck Science Department provides comprehensive, interdisciplinary instruction in small class settings and numerous opportunities for students to conduct research.  Our graduates enter a significant range of careers and enjoy acceptance into prestigious graduate research and heal science programs.