Claremont McKenna College has been named this year’s winner of the Institutional Excellence Award by Heterodox Academy (HxA). President Hiram E. Chodosh will deliver remarks and receive the award on behalf of CMC at the HxA Open Inquiry Awards dinner on June 20 in New York City.

Two days after the elections, George Will could have spent an hour talking about the midterms and President Donald Trump.

Instead, the Pulitzer Prize-winning Washington Post columnist explained that everything you need to know about American political philosophy is an argument between two former Presidents and Princeton alumni (also Will’s alma mater), James Madison and Woodrow Wilson.

Will called Madison’s belief in the doctrine of natural rights the basis of our Constitution. Human nature is fixed, so government should inherently be limited, he said.

Erwin Chemerinsky, the 13th Dean of Berkeley Law and a First Amendment scholar, spoke at the Marian Miner Cook Athenaeum on Oct. 8. He has been named the most influential person in legal education in the United States by National Jurist Magazine and is the author of more than 10 books including The Case Against the Supreme Court and Free Speech on Campus.

The Marian Miner Cook Athenaeum has an established and cherished history as Claremont McKenna College’s beacon for the cultural, social, and academic exchange of ideas.

“The Ath” brings some of the brightest scholars and speakers to campus to discuss—perhaps even debate—the most important topics of our time. In the spirit of community and fellowship, it’s all done over a shared meal in the Eggert Dining Room. 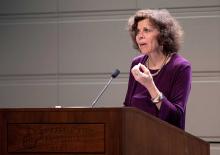 “Too often,” Nadine Strossen told her audience at the Marian Miner Cook Athenaeum April 5, First Amendment advocates assert that “hate speech is absolutely protected,” adding that “I’ve been a little bit guilty of that myself.”