It might have been a case of freshman shyness, or not wanting to jinx any chance her first novel could go to print, but Pema Donyo ’17 worked quietly — dare we say covertly? — on the publishing galleys of her debut novel (The Innocent Assassins, Astraea Press) over the course of her freshman year at Claremont McKenna. 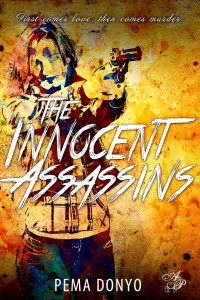 Donyo grew up just a city east of Claremont, in Upland, and wrote her novel during a summer visit to Italy before her freshman year at CMC. It follows the derring-do of Jane Lu, a covert operative assassin forced to spy for the CIA. Remarkably, she would continue her writing while acclimating to her first year of college, without saying a word about it. “I received the publishing contract in August, so all the editing happened during my freshman year,” she says. “The hardest part was keeping it a secret from most of my friends,” said Donyo, who wrote in her dorm room. “I didn’t want anyone to know I was working on the novel until it was published.” Donyo recently published her second book One Last Letter (Crimson Romance), a historical romance set in 1800s Texas, and is currently working on a third novel. We caught up with the new author between coffee refuels, to pry about her first outing and the experience of writing fiction.

CMC: The fantastical adventure/thriller story is so radically alien to your own life experience; how did you come up with the idea?

Donyo: Conflicting viewpoints have always intrigued me. One side can believe they’re just as morally righteous or justified as the other. I thought, “What’s a controversial topic people can be on either side of?” Contract assassination fit the mold. Beyond that, I enjoy creating a world of my own that doesn’t necessarily parallel the world I live in. It’s the best part of being a fiction writer.

CMC: Was it hard sustaining such a plot and characters when you basically (we’re assuming here) had to concoct them from the wellspring of your own imagination?

Donyo: The plot itself was more difficult than character development. There are tons of twists and turns in The Innocent Assassins –– loads of game-changing plot points, classic of the romantic-suspense genre. A huge part of the book is the romance between Jane Lu and Adrian King.

CMC: Did you write it thinking that it would surely be published?

Donyo: I don’t necessarily write for the sake of publication; I write to create the story. I never know whether I want to publish something until it’s finished. I came up with the introduction to the book as a starting point. “There are three rules to staying an assassin at the corporation of Covert Operatives: (1) your parents must be deceased, (2) your contracts must remain confidential, and (3) you must be under the age of eighteen.” I had that in mind before I even considered whether it could be a story, much less be published. From those lines, I developed a plot.

CMC: What was the initial feedback from Astraea Press on why they wanted to publish your novel?

Donyo: I queried several different publishers along with Astraea. I heard a lot of the same responses: “We like it, BUT thrillers aren’t in right now. It’s all about paranormals,” or “We like it, BUT the characters are only teenagers. It’s all about adult romance.” The two aspects I loved most about my novel–– New Adult characters and thriller elements–– were definite risks for some publishers. But Astraea Press didn’t see it that way. Stephanie Taylor (from Astraea Press) loved those aspects of my novel just as much as I did.

For more of Donyo’s story, see the complete interview at www.cmc.edu/news