This year marks the 40th anniversary of Richard Nixon’s resignation amidst the Watergate scandal. Yet it is also the fortieth anniversary of another political development, which although less indelibly etched in the national consciousness, is perhaps more instructive for the midterm election.

In November 1974, the Democratic Party achieved a remarkable sweep winning 75 new seats in Congress, some key Senate seats and several governors races. It was one of the greatest midterm electoral triumphs in history rivaled only by the GOP takeover of Congress in 1994. The historic class of newcomers included Max Baucus of Montana, Christopher Dodd of Connecticut, Gary Hart and Tim Wirth of Colorado, Tom Harkin of Iowa, Paul Simon of Illinois, Pat Leahy of Vermont, Michael Dukakis and Paul Tsongas of Massachusetts, and Jerry Brown, George Miller, and Henry Waxman of California. The members of this cohort primarily emerged from suburban, heavily white, and formerly Republican districts, about half were under the age of forty, and most had relatively little political experience. These attributes earned them the collective label of “Watergate Babies.” Just two years earlier, Nixon won a historic fortynine state landslide and thus perhaps no midterm election was more a disconnect from the presidential race that preceded it. Yet the rise of the “Watergate Babies” was not solely an aberration or backlash against Nixon’s abuse of power. Instead, it marked an important shift in the agenda and composition of the Democratic Party.

Even more than the Republican Party, the Watergates sought to distinguish themselves from the “old politics” of the New Deal and offer a new era of leadership for the Democratic Party and the country. These politicians shared reputations as issue-oriented, reform-minded politicians and while usually liberal on foreign policy and social issues like reproductive rights and the environment, they also emphasized fiscal restraint. At the state level, Governor Brown declared the nation and California had entered an “era of limits.” He, like Dukakis, oversaw sharp budget cuts and crackdowns on fraud and political corruption. In Washington, members immediately instituted changes in Congress that opened up much more of the legislative process to public and media scrutiny, established new standards of accountability for politicians in the executive and legislative branches, passed new campaign finance laws, and revised the filibuster rules to lower the number of senators required to end a filibuster, from two-thirds to three-fifths of the Senate. Members also advanced new laws and policies related to the environment, health care, and high-tech growth.

By the 1980s, many members of the group so intensified their emphasis on high-tech industry that they were re-christened “Atari Democrats.” The cohort continued to advocate for an agenda that combined business-oriented reform and quality-of-life issues, including expanding the technology sectors, investing more in education, research, and worker retraining. They also advocated for balancing the budget, welfare reform, and for environmental protection and transportation initiatives. These ideas have all become central components of the Democratic Party’s platform and crucial to the policy initiatives and electoral success of many politicians including Bill Clinton and Barack Obama. In both of his campaigns as well as throughout his tenure in office, Obama has emphasized pragmatic reform, high-tech employment and entrepreneurship, middle-class tax cuts, and enhancing environmental protection and public education. These themes have earned him the support of suburban tech workers in battleground areas like the research triangle in North Carolina, and the suburbs of Denver and northern Virginia.

The country faces similar issues of foreign policy crisis, economic recession, high unemployment, high oil prices and pervasive disillusionment with government, especially in Washington, that swept the Watergate Babies into office forty years ago. The presence of the group has slowly dwindled, marked most notably by the retirement of both Waxman and Miller at the end of this year, but ideas and the legacy of the Watergate Babies continue to shape the Democratic Party and the midterm elections. In close races in battleground states, newcomers like Michelle Nunn and Jason Carter in Georgia, Allison Lundergon Grimes in Kentucky and incumbents like Kay Hagan in North Carolina and Mark Udall in Colorado have all adopted messages that echo the Watergate Babies. The outcome of November’s election is by no means apparent. But, what the example of the Watergate Babies does make clear is that midterm elections are not irrelevant. Sometimes even more than presidential elections, the midterms can both reflect and stimulate large-scale transformations in party politics and public policy.

Lily Geismer is an assistant professor of history. Her first book Don't Blame Us: Suburban Liberals and the Transformation of the Democratic Party will be released by Princeton University Press in December. 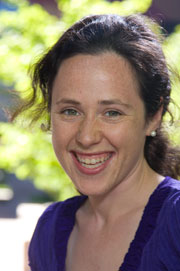