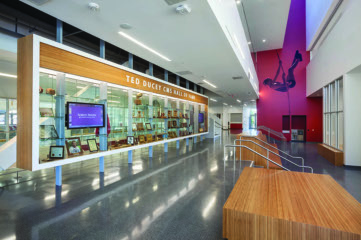 “With all the students together, all the faculty together, and speakers from the outside world, folks can really listen to each other and ﬁgure out a way to solve problems. And I think the more we listen to people with diverse backgrounds and different ideas, obviously the stronger we will all become and that’s my biggest hope for this Pavilion.”

Visitors to Claremont McKenna’s latest addition, the Roberts Pavilion, will ﬁrst notice its airiness, its light, its transparency, its compactness. Sounds pretty alluring, doesn’t it? Good thing, too: All of these qualities will help make Roberts Pavilion a central nexus of the campus. First conceived nearly a decade ago, the 134,000-square-foot building is named for CMC alumnus and trustee George R. Roberts ’66 P’93, and is the answer to an ongoing need for a a state-of-the-art gathering and events facility that could reﬂect the College’s many facets as an institution as well known for its academics as for its athletics.

(Roberts Pavilion takes the place of Ted Ducey Gymnasium, a space that was dedicated to athletics.) Part of the impetus for the creation of the Pavilion is the unspoken divide between athletics and the student body at many other campuses, added Chris Spells, the new manager of Roberts Pavilion, and CMC’s director of recreation. “Athletics and campus can share one space here at Roberts,” he said. “Students, faculty, and staﬀ may initially come here for games, but they’ll quickly realize that it’s meant for more than just that.”

Varsity Stags and Athenas volleyball and basketball games will be held in the Pavilion’s main arena, but that space is purpose-built to be multipurpose, with its capability to host a variety of events ranging from speeches to musical performances. Roberts has already proven its versatility by hosting convocation, the dedication and many sporting events so far this year. (For each type of event, the acoustics and setup of the main arena can by adjusted with minimal eﬀort through a series of well-designed and modular changes.) 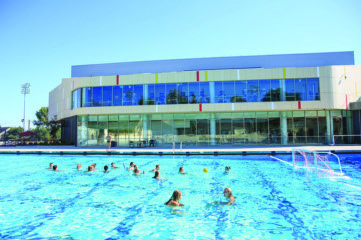 Roberts also boasts a variety of cardio ﬁtness and weights equipment, and multiple group class spaces can be reserved for ﬁtness and wellness classes by any student, staﬀ, or faculty member. An additional recreational court*, one level up from the main arena, can be used for intramural or club sports. “When games aren’t being played in the main arena,” said Spells, “anyone can practice in it, and varsity teams are just as likely as club or intramural teams to use the rec court.” Roberts also oﬀers multiple conference rooms that can be reserved by students, staﬀ, or faculty. And it also has a number of lounge areas, inside and outside. The overarching vision is for spaces that student will use for activities ranging from study groups to social gatherings.

Roberts also oﬀers multiple conference rooms that can be reserved by students, staﬀ, or faculty. And it also has a number of lounge areas, inside and outside. The overarching vision is for spaces that student will use for activities ranging from study groups to social gatherings. The primary artistic piece in the Pavilion, a “character wall” near the front entrance of the structure, speaks to that aspiration. John Friedman, a principal at JFAK Architects, which won the bid to design the space, refers to it as “Jasper Johns-inspired.” “You come in and you see all these oﬀset words,” he said. “They’re words that talk about the global outlook of the school and the student population.” And the character wall, which calls out words such as “Community,” “Empathy,” “Leadership,” and “Responsibility,” spells out these words in languages as diverse as Hindi, Russian, French and English, further reﬂecting the makeup of CMC’s student body.

In a prescient nod to the added sense of community that Roberts will no doubt impress on CMC, the words and the languages that were ﬁnally chosen for the character wall were crowd-sourced in a survey that went around campus last year.

Friedman says the ﬁrm, ﬁrst and foremost, took into consideration the college’s desire for a “social nexus.” “The compactness of the building works to push people together, and you get a lot more activity overlapping,” he said, recalling a wide stairway in the center of the facility that channels visitors through the heart of the building as an example. Photos of CMC athletes, some of which span two ﬂoors of the building—a diver transcends the ﬁrst and second ﬂoors, for instance—contribute to the seamlessness of the design.

But there’s more to consider than just the excitement of a new addition to CMC’s campus and its innovative mission: The architects also recalled the big, historical shoes that Roberts Pavilion had to ﬁll: that of the beloved Ducey Gymnasium. Visitors to the coaches’ oﬃces on the third ﬂoor of Roberts will recognize the backsplash behind the receptionist’s desk, which is composed of part of the Ducey Gym ﬂoor, and benches from Ducey serve as focal points and donors’ plaques on the ﬁrst and second ﬂoors.

Spells is also in charge of programming for the Pavilion, although he’s equally focused on boosting the proﬁle of the facility on campus. “Right now it’s my job to ensure that news of Roberts gets out,” he said. “It’s a testament to CMC that there is so much stuﬀ going on, but we’re going to be inviting people in so that they know we’re here and ready. I want current students and faculty to come, but also alumni who haven’t been here for twenty years to feel comfortable coming here and learning about Roberts.” Spells and his staﬀ, many of whom are students, will conduct rolling tours on request.

One ﬁnal physical trait of Roberts Pavilion is worth calling out: its windows. Spells and Friedman reﬂect upon the “transparency” of Roberts as being one of its best assets, and this, perhaps, is an apt metaphor for another need the facility can service: that of overall campus wellness.

Spells says, “We’ll be hosting nutrition classes; yoga classes. We sent around a survey in the preview days asking if people would be interested in this kind of oﬀering, and we got a hundred percent ‘yes’ back,” he said. “So we’ll have not only yoga classes but also classes on why yoga is important. It’ll take us time, but it’s needed, and it will help people live sustainably for the rest of their lives.”

For George Roberts, the beauty of the new space lies in its very ambition and possibility. “Just think about what this space does and what can be done with all of it in a short period of time,” he said at the dedication ceremony in September. “It has really surpassed, quite frankly, anything my imagination and desires were.”