Becky Cheng ’17 and Nitin Kuppanda ’17 can add published authors to their resumes. Last spring with Patrick Ferree, associate professor of biology at Keck Science Department, the CMCers did the heavy lifting on a Current Biology paper about a bacterium that attacks and kills only males of a certain fruit ﬂy species. Their combined research could possibly help scientists ﬁght insects that are pests to humans, including those carrying disease-causing agents, such as Zika virus-carrying mosquitoes.

TechCrunch recently reported that codeSpark, the Los Angeles startup co-founded by alumnus Grant Hosford ’92, has raised $4.1 million in seed funding for web and mobile games that teach kids how to code. The games are available for free to public schools, libraries and nonproﬁts. But parents also can purchase and download them for phones and tablets. Hosford says more than 4 million kids in 201 countries have already played the edtech startup’s ﬁrst game: The Foos Coding. 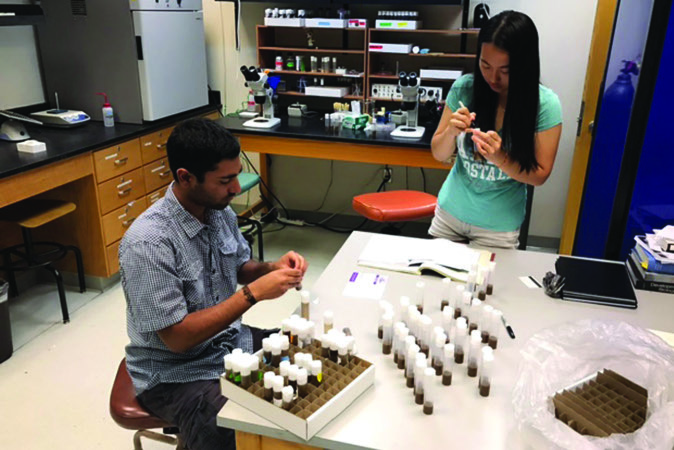 Cathy Reed, the McElwee Family Professor of Psychology and Neuroscience and George R. Roberts Fellow, and collaborators from the University of Richmond and Hampshire College, have received $600,000 from the National Science Foundation to improve the teaching of cognitive neuroscience at undergraduate institutions. The researchers will focus on the teaching of cognitive electrophysiology, a technique found to be particularly conducive to undergraduate learning. Reed and her collaborators also will work to develop a curriculum to engage undergraduate students in cognitive electrophysiology research.

Assistant Professor of Environmental Science Branwen Williams was proﬁled in National Geographic’s web series “Best Job Ever” for her research on algal skeletons in the Arctic. Her team had to work with sled dogs and ﬁght hypothermia-inducing temperatures to get the research they needed to track climate change in our oceans. Professor Williams is a National Geographic grantee. Visit here for more information.