Prof. Rod Camp on the rough road ahead for Mexican democracy

What citizen perceptions suggest about the country’s political evolution

Editor’s Note: A new study by Professor Rod Camp examines the evolution of public opinion in the United State’s neighbor to the south, Mexico. Why has public opinion grown there since the 1940s? Its development, he explains, goes hand-inhand with the activism of the country’s newspapers in gathering polling data about changing attitudes to religion, economics, politics, and much more.

In the following excerpt adapted from Camp’s essay “Ordinary Opinions of Everyday Mexicans: Polling from the 1940s-2012,” which is featured in the “Oxford Research Encyclopedia of Latin American History” (Oxford University Press), his analysis ranges across Mexican society to give us a sense of what the citizenry think now about the country’s present and future challenges.

To capture a broader, general view of what Mexicans value and how they see themselves, I have created an eclectic table, drawing on a recent survey sponsored by Banamex, a banking institution which has played a crucial role in supporting national survey research on Mexicans and their values, cosponsored by Este País, the first monthly magazine in Mexico devoted to publicizing and analyzing survey research and public opinion polls. The bicentennial celebrating Mexico’s independence attracted significant attention in Mexico, including that of pollsters.

Surveys as recent as 2013 demonstrate that most Mexicans know commercial holidays such as Valentine’s Day, or religious holidays, such as the Virgin of Guadalupe, but fewer Mexicans (85 percent) know the meaning of September 16th, which would be equivalent to July 4th in the United States. Even more surprising, only seven out of ten Mexicans know the significance of November 20th, the date that is officially celebrated as the beginning of the Mexican Revolution of 1910, or May 5th (Cinco de Mayo), celebrated by many Mexican Americans in the United States, which is viewed as that most significant celebration of Mexican nationalism other than its independence earlier in the 19th century. Similarly, when asked if they knew much or something about the most influential political figures in their history, half or fewer claimed to know anything about such major historical figures as Miguel Hidalgo, Benito Juárez, Emiliano Zapata, and Pancho Villa. Interestingly, one of the most influential consequences of the 1910 Revolution was the promulgation of the 1917 Constitution, the document currently in force. Yet, the content of the most widely discussed articles of the constitution, often used as street names throughout Mexico, Articles 3, 27, and 123, cannot be identified by three-fourths or more of all Mexicans. 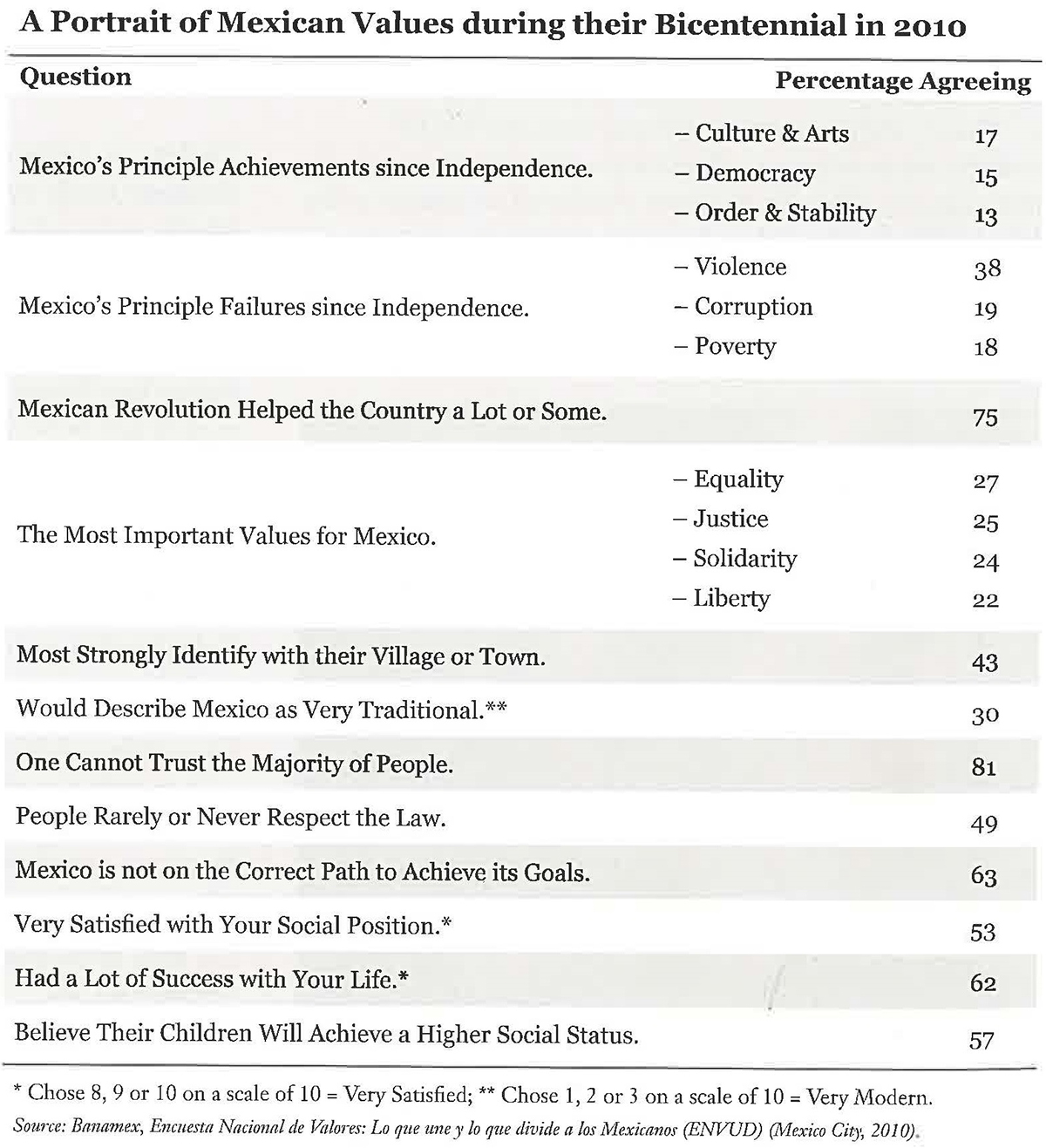 Nevertheless, the Banamex data reveal that Mexicans overwhelmingly believe that the revolution has benefited the country. Regardless of whether Mexicans know the precise date of these events, the revolution remains a central feature in Mexicans’ vision of where the country has come from in the 20th century, and even where it might be going in this century.

This can be seen in the responses of Mexicans during the bicentennial year when asked specifically which values they considered to be most important for the country.

The four values chosen most frequently by the respondents were: equality, justice, solidarity and liberty. As perceptive analysts of the revolution have noted, the central concept of constitutionalism itself emerged from the revolutionary decade of 1910–1920. The principles which are often identified as encompassed within the scope of Constitutionalism include social justice, equality, respect for all citizens, and political liberty. Thus, contemporary values are strongly linked to historical experiences, and to the study of Mexican history in elementary and secondary schools.

Mexicans also share great pride in their culture and in being Mexican. As they review two centuries of their post-independence history, they have major identified three important achievements: culture and art, democracy, and order and stability. No one would dispute their achievements in culture and art, especially the impact of Mexican artists on global art both methodologically, with their sweeping murals, typically presenting broad historical themes, and stylistically, in terms of technique, color, and composition.

The remaining two selections demonstrate a hybrid quality which Mexicans come by honestly, the long sought-after goal of electoral democracy, which had only been achieved in the presidential election of 2000, and therefore is very much on the minds of Mexicans today. At the same time, however, they also highlight order and stability as one of their strongest achievements, a quality which many observers have associated with Mexico for most of the 20th century, during which Mexicans were governed by a semiauthoritarian, one-party model.

That combination of old and new political influences also continues to reveal themselves in Mexican attitudes toward modernization. When asked if they viewed their country as very modern or very traditional, one out of three opted for the very traditional description. That view of a traditional Mexico likely incorporates values and behavior. One of the ways that can be seen in another response in the accompanying table is a question pollsters use to determine the level of national identity within a country, asking respondents to choose a geographical level of identity ranging from being a citizen of Mexico, to a region, a state, or a local community. It is important to note that a large minority of Mexicans (43 percent) identify most strongly with their local village or town. Such an identity reinforces localism and regionalism, both of which have a long historical tradition in Mexico.

Major failures and the future

When Mexicans are asked to identify the major failures of the country in the last two centuries, all three choices incorporate the two most pressing issues of the 21st century, security and economic well-being. It is no accident that two-fifths of Mexicans consider violence to be the country’s greatest failure, while another fifth chose corruption. Mexico is facing a challenging crisis of personal security because of the inability of the state to eliminate the impact of organized crime, and more specifically drug cartels. The majority of Mexicans believe that the widespread presence of corruption is the greatest obstacle to defeating and eliminating organized crime in their country. Given their impressions of personal security, whether real or imagined, their level of trust in one another had declined to extraordinarily low levels, with eight out of ten Mexicans now asserting that the majority of their fellow citizens cannot be trusted.

The data in the table suggest a difficult path for Mexico’s democratic transition. Although it has achieved an electoral democracy, despite the fact that a large minority express doubts about that achievement, the responses to several of the questions indicate major obstacles confronting democratic consolidation. Only one in two Mexicans believe their fellow citizens rarely or never respect the law, and nearly six out ten citizens assert that their country has not addressed the issues of violence or corruption. A democratic model’s legitimacy relies on high levels of trust. To be successful in the process of governance, it also must operate within a culture of law, and a setting conducive to effective implementation of government legislation.

Public opinion polling continues to be a critical source of understanding Mexican values and attitudes, and how those attitudes have changed, especially in the last three decades. Without those surveys scholars would have little understanding of how historic and contemporary patterns of behavior have influenced Mexicans’ values, nor would we be able to measure, in some cases, a sea change in so many attitudes in recent years, many of them impacting on their transition to democracy. Moreover, it is essential to recognize that in Mexico’s shift from a semi-authoritarian political model to an electoral democracy, the presence of pollsters and their polls played a fundamental role in that process.

Camp is Philip M. McKenna Professor of the Pacific Rim at CMC and serves as a member of the Advisory Board, Mexico Institute, Woodrow Wilson Center for International Scholars, Smithsonian Institution. His many books include “Mexico, What Everyone Needs to Know” and “The Metamorphosis of Leadership in Democratic Mexico.”