Amy Kind, Russell K. Pitzer Professor of Philosophy, has been named director of the Gould Center for Humanistic Studies, effective July 1, 2018. Consistent with the Center's mission, Professor Kind will guide future research, study, and experience in art, literature, history, philosophy, and other fields in the humanities as a means to understand and develop the power and use of the imagination.

Professor Kind brings to the position a vibrant research agenda, a deep devotion to the humanities, and an open commitment to engaging a diversity of voices and perspectives. She has published extensively on the imagination and phenomenal consciousness.

Professor Kind has been on the faculty at CMC since 1997. She has served in several senior leadership positions at the College. She was interim director of the Gould Center in 2011-2012, chair of the philosophy department from 2009-2012, and associate dean of the faculty from 2005-2008. Last year, she received the Presidential Award for Merit. Professor Kind has also received the Dean's Distinguished Service Award and the Roy P. Crocker Award for Merit. She served as president of the Southern Society for Philosophy and Psychology in 2016-17 and on the Board of Officers of the American Philosophical Association from 2014- 2017.

Professor Kind succeeds Professor Robert Faggen, Barton Evans and H. Andrea Neves Professor of Literature, who has made rich contributions to the College as director of the Gould Center for the past ten years. Professor Faggen has enriched the CMC community's connection to the humanities and the arts through a broad offering of seminars, guest lecturers, Athenaeum speakers, and cultural experiences off campus. He was the driving force behind the establishment of the Milosz Institute at the Center, the performance of Philip Glass' Book of Longing, an exhibition of Leonard Cohen's artwork at the Athenaeum, and most recently, the commission of Mary Weatherford's mural, "From the mountain to the sea," and its installation at the Athenaeum. 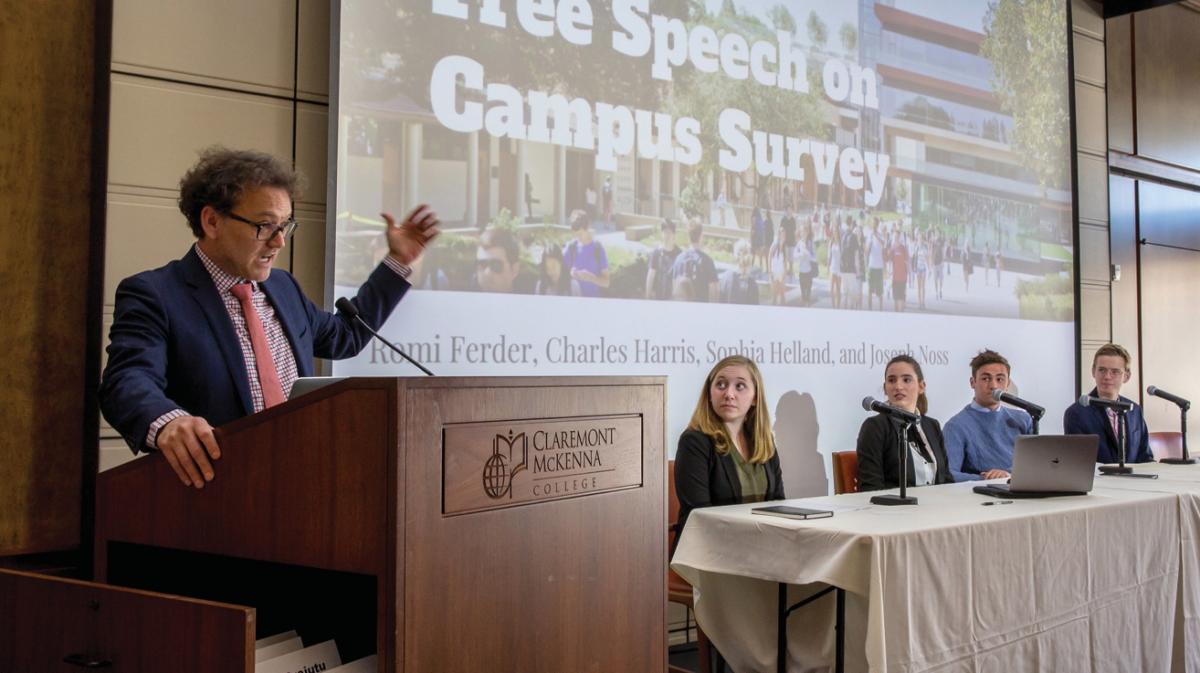 George Thomas, Burnet C. Wohlford Professor of American Political Institutions, has been appointed director of the Salvatori Center for the Study of Individual Freedom in the Modern World, effective July 1, 2018.

In his role, Professor Thomas will cast a wide net to engage students and faculty in the study of political philosophy and freedom as it relates to American Constitutionalism and the American Founding. He will bring American political thought to the forefront of scholarship and programming at the College. He will reach across disciplines to spark research collaborations, promote the dissemination of scholarly work in academic presentations and publications, and engage the campus community in relevant, timely discussions around topics such as civil liberties, civic engagement, and free speech.

Professor Thomas is a prolific scholar with a deep commitment to student learning. He teaches the PPE Politics Tutorial and Seminar and Constitutional Law. His scholarly areas of expertise are American constitutionalism, American political thought, constitutional law, and the Supreme Court.

He has published two books, a constitutional law casebook (forthcoming), and over twenty journal articles, book chapters, and essays on these topics.

Professor Thomas replaces Professor Mark Blitz, Fletcher Jones Professor of Political Philosophy, who has contributed substantially to the growth of the Salvatori Center as director since 2008. Under Professor Blitz's leadership, the Center secured a substantial grant to advance the study of Leo Strauss' thought through scholarly conferences featuring experts on Strauss and a successful summer fellowship program for undergraduates to study Strauss' writings. Other signature programs initiated under his directorship are a large annual conference on a major thinker in the history of political philosophy and a series of workshops and publications on various issues of public policy, viewed from a constitutional perspective. Professor Blitz's special contributions will sustain the important role of the Salvatori Center in the intellectual life of the College for many years to come.