Speaking at the College's 71st Commencement ceremony on Pritzlaff Field, Lagarde challenged the graduates to make an impact that will be seen by students who will soon follow them. "Ten years from now, when the class of 2028 stands here and prepares to graduate, what will you have done to help them?" she asked.

Lagarde, the first woman to head the IMF, is credited with helping to stabilize the world financial system after the 2008 recession. "A lot was done over the past decade," she said. "A great depression was prevented. More resilient economies and safer financial systems were built. And because of this work, you, the class of 2018, have more freedom to chart your own course."

Claremont McKenna College President Hiram E. Chodosh asked the class to think of their own triumphs during college, and to think about how they can use the "confidence and courage" they have developed to "keep earning your way with hard work, preparation, and a commitment to excellence, to keep reflecting on the deep learning and inspiration you draw from it, in all you set out to do in the future."

Isabel Lilles '18, the elected class speaker, compared her CMC experience of the past four years to the narrative of campus tours that highlight the close relationships among students, and among students and faculty, at CMC.

During her visit to CMC when she was in high school, Lilles said she and her mother sat in their rental car after the tour, silent for a moment. They turned to face each other, and Isabel said, "Mom, this is it." 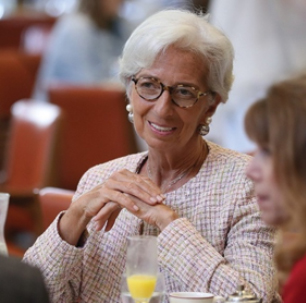 ​Lilles said her intuition on the CMC tour that she had found the right place was validated when she enrolled. Lilles recalled speaking with Jennifer Taw, associate professor of government, "about the use of drones in Yemen, the secrets to baking the perfect chocolate chip cookie, and how to succeed as a woman in a male-dominated field, all in the same conversation."

Lilles said her anxiety about speaking before a group was so high that she hyperventilated in Taw's class. Taw suggested she leave the classroom to collect herself and advised her on how to face audiences. "I'm certain that without her I would not be speaking in front of you today," she said.

Lilles said that just as she felt on her CMC visit that "this is it," commencement should inspire the same feeling of certainty in her classmates. "Class of 2018. This is it," she said. "This is the end and the beginning. This moment is both fleeting and infinite. Take in every second. This is it."

Several members of the class made personal sacrifices to either attend-or forego-the ceremony. Two stars of the women's softball team, Anna Gurr '18 and class valedictorian Briana Halle '18, missed an NCAA playoff game to be at commencement.

Moments before commencement, Lindsay Brown '18 defeated her Pomona-Pitzer opponent in the NCAA women's tennis regional, which was played at CMC. Brown was able to throw her gown over her tennis uniform and run to the ceremony, catching up to the class just as they entered the commencement tent.

Lagarde was awarded an honorary Doctor of Laws degree. 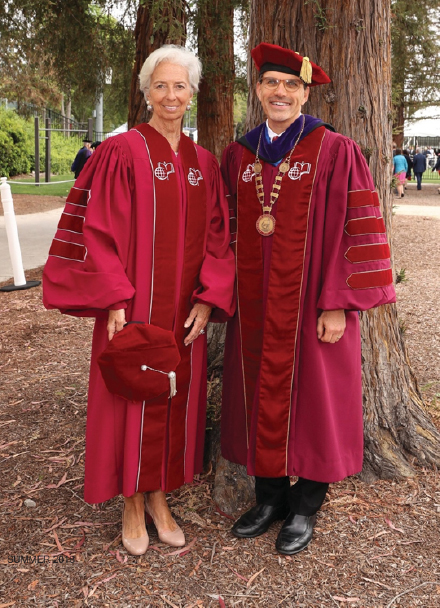 An Officier in the Légion d'honneur, Lagarde – pictured at right with President Hiram Chodosh – began her career as an associate at the law firm of Baker & McKenzie. She served as France's minister for foreign trade, minister of agriculture, and fisheries, and minister of finance and economy prior to becoming managing director of the IMF.