In 1937 Russell McCullough Story, professor of political science at Pomona, began a two-year term as president of the Claremont Colleges. For the next five years, Russell Story kept faith with the Group Plan and the establishment of a third college. A third undergraduate college, Story believed, was necessary to stabilize the Group Plan. During his presidency Story worked with trustees, faculty and outside consultants, to keep alive the viability of the third college option.

In 1939 President Story issued "Green Lights Ahead," which specifically solicited a founding gift. Already two gifts, totaling $25,000, were in hand, supporting the appointment of Arthur Coons, the probable president. The year the pamphlet series appeared, 1938, an anonymous but long-standing friend of the Claremont Colleges pledged $20,000 to $25,000 at a future date, but made the interest immediately available to the third college project. 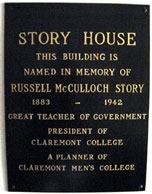 In June 1941, President Story, urged the Board of Fellows to action, and they agreed. In late October, Story traveled east in search of support for a program. He told prospective donors, that they would open with a class of twenty-five students in the fall of 1942 and would move toward incorporation as an independent college in 1947. Eastern foundations seemed uninterested in founding colleges in Southern California, however novel and venturesome.

By January 27, 1942, Story was admitting defeat. "It seems rather tragic," Story lamented, "that the venture which was so close to being established in 1929 is now the victim of another set of circumstances equally catastrophic, if not more so. Certainly the idea will find embodiment some place, somewhere, some time. At present we have more urgent problems on our hands." Shortly thereafter, Story went into sudden decline. On March 26, 1942, Russell Story died of a heart attack. 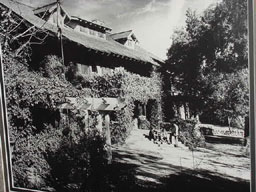 In 1946, the Los Angeles Times ran a story on the conversion of a mansion into a college dormitory and dining commons, soon to be called Story House, in honor of the late president of the Claremont Colleges, Russell Story (who can almost be said to have given his life on behalf of the third college). The three-story mansion constituted the School's only permanent building on campus for the first year and a half of the College's existence. Story House served as a dormitory, commons, and central point of identity and reference. If CMC had to get by, temporarily, with one permanent building, it was fortunate that this building should be Story House.

Story House-a Craftsman masterpiece, the first true CMC building, was severely damaged by fire on Monday, 17 February 1969. Investigators blamed the blaze on an un-insulated steam pipe that finally ignited adjoining wood; but there were also strong suspicions of arson. 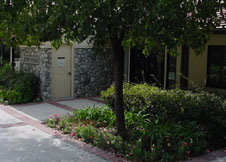 Story House was rebuilt in 1970 at the current location. In 1994, it was expanded and renovated. It serves as the home of the Facilities & Campus Services department on the Claremont McKenna College campus. The students visit Story House weekly if not daily seeking assistance with their dorms, looking for help with their keys or picking up their mail at the student mailroom. Both students and staff alike, still think of it as the central point of identity and reference for the campus.