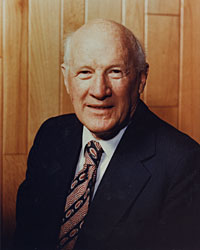 A linguistic scholar, savvy entrepreneur, and benevolent philanthropist, Donald McKenna played a significant role in the establishment of Claremont Men's College in 1946. As one of the first trustees, McKenna initiated support for a third college, the college that would be Claremont McKenna, and remained a generous contributor  to the College for the rest of his life.

McKenna was born in Colorado in 1907 to Alexander and Eliza McKenna; the family moved to Claremont in 1918 to alleviate his father's trifacial neuralgia. The McKennas lived in what is now the Claremont Inn for five years, where they held weekly discussion groups. McKenna lost himself in these discussions every Wednesday night, fascinated by language and the power of words.

His love of language led him to pursue a degree in English literature at Pomona College, and McKenna graduated Phi Beta Kappa in 1929. He continued on to Harvard to pursue a Ph.D. However, McKenna left Harvard in 1934 after slowly becoming uninterested in his original career goal of becoming a literature professor. McKenna's passion for words had transformed into an entrepreneurial hunger that he yearned to feed by returning to Claremont, where he joined the family firm, Kennametal, in 1940.

By 1944, McKenna's drive and determination to construct a new college fueled the way for the establishment of the original Claremont College Undergraduate School for Men. The Servicemen's Readjustment Act (better known as the GI Bill of Rights) advanced the need for this third college in Claremont; this legislation provided millions of federal dollars to World War II veterans pursuing a college degree. However, though the trustees expected millions of federal dollars to arrive in the future, the grants would not arrive in time to open the doors of Claremont Men's College. As a result, McKenna donated, first with his own money and later through fundraising, the initial budget, turning the college from a dream into a reality.

The memory of Donald McKenna still lingers, as CMC students and faculty celebrate his great life in many ways. The WordsWorth Society, a favorite of McKenna's, hosts lunches in October to commemorate his birthday. The McKenna International Summer Internship Program, endowed from McKenna's personal trust bequeathed to the college on his death, offers financial assistance to students pursuing internships abroad during the summers of their sophomore and junior years.