Both CMS Tennis Teams Heading To The NCAA D-III Quarterfinals 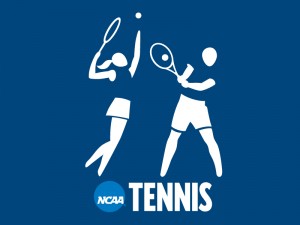 After getting wins in the second and third rounds of the NCAA Division III Tennis Championships, May 11-12, at the Biszantz Family Tennis Center, both the Claremont-Mudd-Scripps women’s and men’s tennis teams are heading to the NCAA Division III Tennis Quarterfinals Monday, May 20, in Kalamazoo, Mich. The No. 2 ranked Athenas defeated UC Santa Cruz (5-1) and Pomona-Pitzer (5-3) to advance while the top-ranked men’s squad cruised to wins over Redlands (5-0) and Cal Lutheran (5-1).

The Stags are 28-3 this season and ranked No. 1 in Division III for the first time in program history. In the quarterfinals on May 20, the Stags take on Middlebury at 1:30 p.m. EST. At the end of March, the Stags faced Middlebury at the Biszantz Family Tennis Center, winning 8-1. Middlebury is 20-4 this season.

You can watch both tennis teams at the NCAA Championships on the NCAA’s website here.