Steven L. Eggert ’82 P’15 fondly recalls the spirited discussions held at the former president’s house on Columbia Avenue, the predecessor of Marian Miner Cook Athenaeum. He remembers joining his fellow ROTC cadets to dine with officers there, a military tradition in which cadets polish their manners amid civilized conversation—at least until the toasts began and the smoking lamp was lit.

Construction on the Athenaeum did not start until the semester after Eggert graduated, but years later, when he joined the Board of Trustees in 2010, he oversaw a refresh of the building, including changing its blue color scheme—a Pomona color!

On Thursday, the dining room was named the Eggert Dining Room in recognition of his long history of contributions to CMC. Eggert’s $2.5 million donation earlier this year supported the completed renovation of the dining room and provided additional funding for the Steven L. Eggert Professor of Leadership, which Eggert endowed in 2010 and is currently held by David V. Day, Professor of Psychology and Kravis Leadership Institute Academic Director. The gift also established the Eggert Scholars Program, awarded on the basis of both academic standing and demonstrated financial need. 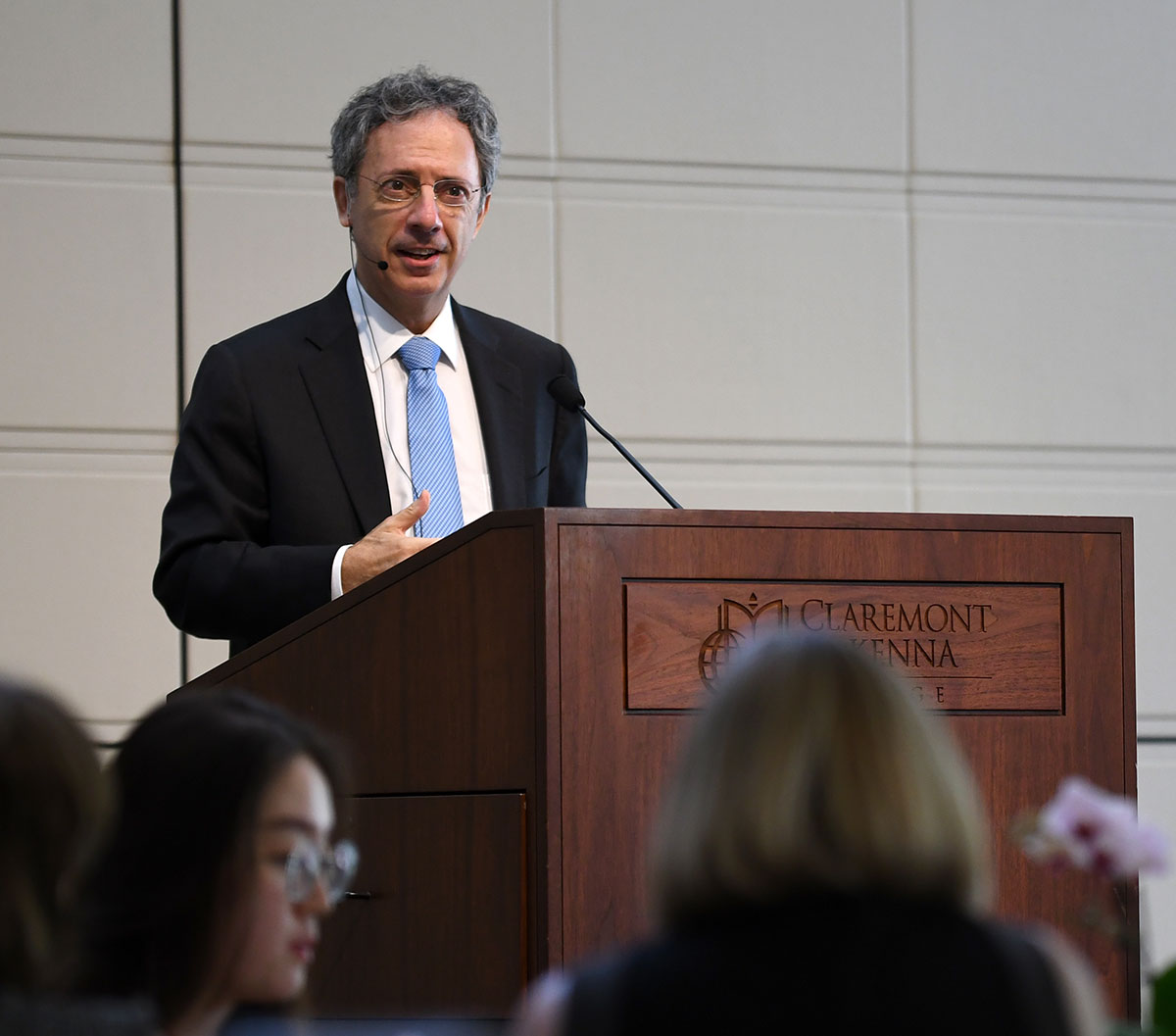 CMC President Hiram E. Chodosh expressed deep gratitude to the Eggert family for its support of the Ath. “It is not just a physical place, or even just a program, it is the intellectual center of the school,” he said. “It is the heart of the school.”

The Ath is also an essential part of CMC’s Open Academy initiative, which was publicly unveiled at Thursday night’s dinner. The Open Academy is based on three equally essential commitments: freedom of expression, viewpoint diversity, and effective dialogue. Chodosh said CMC is taking the lead in higher education in addressing our nation’s divisive public discourse.

“What we need to do is bring the centripetal strategies, the strategies that bring people together, to reverse the centrifugal effects, the effects of division,” he said.

“Freedom of expression alone is not enough,” Chodosh added. “That we protect those rights is very vital, but unless it is engaged in a different point of view, no one learns anything.”

An education in values

Eggert, a Southern California native, first heard about CMC through family friends, John and Harriet Schultz. Eggert was a first-year student at Cal Poly Pomona when he joined his father and Schultz for lunch with Jerry Garris, who was then CMC’s Dean of Students. Garris encouraged him, successfully, to transfer to CMC. Once in Claremont, Eggert joined the Army ROTC program. He went on to serve as a U.S. Army officer and Airborne Ranger, patrolling the Iron Curtain in Germany.

His ROTC experience, Eggert said, drilled into him a way of life with a clear set of values at its core. “The military has a great value system, one in which integrity is really important,” he said. “It was surprising to me out in the civilian world that it was not always the case.”

As founder of Anton Development Company, which develops, constructs, owns, and manages multifamily rental apartments throughout California, Eggert has aimed to lead his team of 100 or so employees with those same values in mind. “I go back to my high school baseball coach who used to say what mattered was how we acted when the coach isn’t watching,” he said. “I’ve tried to instill that thinking in my team.”

David Mgrublian ’82 P’11, chair of CMC’s Board of Trustees, has known Eggert since their days on campus. “He has always been a person of character and principle, who cares deeply about the College,” Mgrublian said. “In particular, he knows how fundamental freedom of expression and viewpoint diversity are to CMC. His gifts of time, talent, and treasure to the Athenaeum are simply Steve being true to his values and those of the College. CMC is so fortunate to have Steve as a trustee and benefactor.”

Eggert, who holds a law degree from UC Berkeley and practiced real estate law before becoming a real estate developer, cited Justice William O. Douglas as one of his influences. Douglas was a strong defender of free speech who argued that the solution to bad speech was more speech. The Ath’s mission of encouraging civil discussion and presenting myriad ideas is vital to the College and beyond, Eggert said.

“No matter what rights might be limited, as long as you have freedom of speech, you can have hope. You can use your voice to speak out for any other rights,” Eggert said.

Bringing campus speakers with diverse perspectives is “hugely important to me,” Eggert said. “For myself, I want to learn more from those people who I am aligned with, but also to hear from those who can challenge my views and who I can challenge about theirs.”

The first of those speakers, Peter Berkowitz, Tad and Dianne Taube Senior Fellow at the Hoover Institution, gave the keynote address on “Free Speech and Liberal Education” at the dedication. Berkowitz posited that free speech undergirds liberal education, and in turn, a proper education strengthens free speech. The struggle of free speech on campus is “not an isolated struggle,” he said, but connected to the struggles of due process and those of the curriculum. Unfettered speech is not, as often stated, in conflict with the values of diversity and inclusion.

“Yes, words wound. All children understand this. But the cost of policing it far outweighs its benefits,” Berkowitz said. Noting that free speech historically has been a tool of reform movements, “it seems to me that a campus that protects free speech is by nature diverse and inclusive,” he added.

Speaking to a gathering that included his wife, Pam, children, and parents—as well as former Dean Garris and the couple that started it all, the Schultzes—Eggert called out to the students and younger alumni in the room. While at CMC, “I couldn’t imagine having the centerpiece of the college named after me,” he said. “But it can happen. It can happen for an ROTC cadet.”