Former Duke U. President Speaks On Leadership Out Front and Behind the Scenes 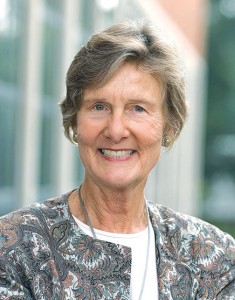 Former Duke University and Wellesley College president Nannerl Keohane discussed leadership as it relates to social movements, political mobilization and the roles of women, to an audience at the Athenaeum on April 22.

Describing the first of these styles as “leading from behind,” Keohane quoted Nelson Mandela’s autobiography Long Walk To Freedom (Little, Brown & Co., 1995):

“A leader is like a shepherd,” said Mandela. “He stands behind the flock, letting the most nimble go out ahead. The rest follow, not realizing all the while that they are being directed from behind. “

The second type of low-key leadership is sometimes associated with women, according to Keohane. Citing a report from a commission she chaired at Princeton University assessing undergraduate leadership, Keohane found that women tended to prefer lower profile or “behind-the-scenes” leadership roles.

“They were more comfortable leading in a less prominent post-- as a campaign manager for a presidential candidate, a secretary, a treasurer,” she said.

In contrast, the men in the study were much more likely to favor high-profile, “out-front” leadership positions.

Additionally, she found that Princeton undergraduate women were more likely to lead cause oriented organizations like those advocating for the environment, social services, the arts and educational reform. In interviews, the women said “they preferred to put their efforts where they would have an impact, rather than having a high profile, advancing their own resumes or having a big title.”

The third type of low-key leadership could be found in the so-called ‘leaderless revolutions,’ according to Keohane, who cited the Arab Spring and Occupy Wall Street movements as examples.

“In both cases activists worked together for months, communicating through social networks, organizing smaller protests and developing tactical goals,” she said. “Symbolic figures emerged that helped trigger the movements that followed.” However, she asserted: “There have been no visible charismatic leaders, dominant figures, spokespersons or key negotiators.”

Reasons for this include a philosophy of egalitarianism which disapproved of visible leaders grabbing attention and undercutting the image of public unity. In other cases there was fear of arrest, torture or death for standing out above the crowd.

In discussing the future of leadership, Keohane returned to the gender differences she found in the Princeton study, findings of particular interest to her as the first contemporary woman to head both a major women's college (Wellesley) and a great research university (Duke). She was a key figure in changing the perception of women's ability to lead major higher education institutions.

“In our Princeton report we spoke optimistically about how men and women will take on both kinds of leadership-- out front and behind the scenes. We (stated) that leadership of both kinds is important to getting the work of the world done (and) it should not be so frequently divided along gender lines.”

A few lessons Keohane draws from second wave feminism, the Arab Spring and the Occupy movement is that there are limits to what you can accomplish without both kinds of leaders. She argued that not only are low-key organizers needed behind the scenes but also leaders that are willing to provide out-front leadership.

“We need leaders that can devise strategies and inspire other people to follow-them, leaders that can negotiate with the powers against which they are struggling, provide successful transitional leadership to a new society, design successful institutions and take their place among world leaders.”

In addition to Thinking About Leadership, she has published the Renaissance to the Enlightenment (1980) and Higher Ground: Ethics and Leadership in the Modern University (2006), as well as essays on feminism, the history of political thought and higher education.