Former U.S. Ambassador, Samantha Power, urges students to hold on to their ideals and heal divisiveness

Samantha Power’s political idealism—a granite faith in democracy and America’s moral duty to protect it around the world—began taking shape in 1989 on the day tanks rolled into Tiananmen Square.

Power, then a Yale student interning at an Atlanta news station, was taking notes on the Braves baseball game as she watched the scene in Beijing unfold on another screen in the newsroom. In the weeks that followed, Power couldn’t shake her discomfort—people her age were risking their lives to fight for democracy while she was watching baseball.

It was the first time that she “reacted to current events as if they mattered to me,” Powers told an overflow crowd at the Marian Miner Cook Athenaeum.

The interplay of democracy, military force, and human rights in Beijing that day became the leitmotif of her career as a war correspondent, author, and government official. After covering the Balkans in the 1990s, Power wrote a Pulitzer Prize–winning book, A Problem From Hell: America and the Age of Genocide, which made the case for American intervention to try to halt genocide anywhere in the world. As U.S. Ambassador to the United Nations from 2013 to 2017, Power continued to call—often controversially—for America to use its leadership and, at times, military to protect human rights around the world. 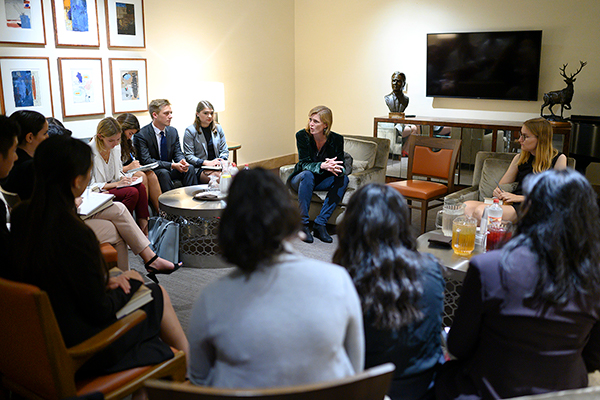 Power described her new memoir, The Education of an Idealist—a title, she joked, that seemed “the description of a CMC education”—as tales of hanging around a Dublin pub as a child, romance, baseball, Putin, war, and policy. It also speaks to “the doubts and vulnerability one feels in trying to make a difference in a messy and sometimes seemingly very cold world.”

Specifically, Power called out polarization and technology’s role in exacerbating differences among people as the “greatest threats” to U.S. national security. The hardening of political identities and growing distrust of members of the opposite party is destabilizing foreign policy, as well as domestic politics.

“I’m not sure it has fully penetrated how dangerous it is for America’s ability to conduct its foreign policy,” she said.

Among polarization’s tangible consequences: making it more difficult to get bipartisan support, heightening the risk of huge and extreme policy swings, and undermining attempts to secure international agreements.

Power sounded the alarm about how America’s rivals were becoming adept at using social media—primarily Facebook—to serve their own interests by deepening divisions on issues such as gun control, race, climate change, and the like. Foreign governments and non-state actors, said Power, are seeking to use technology to exploit our relatively open society, and our increasing polarization has given them a “big juicy target.” While admitting there is no easy solution, she said, “healing divisions has to be a huge priority.”

Repressive governments around the world are also exploiting technology to tamp down protest in their own countries, with the lives of marginalized people particularly at risk.

“The leadership of well-rounded, tech-savvy, and civic-minded young people like you is going to be needed to rein in the destructive power of technology,” Power said.

Despite those dangers, and bubbling concerns that democracy is on the decline, Power said she was reassured by the cyclic nature of history and the instability of autocracies over time.

Power advised students to avoid becoming overwhelmed, and losing their own idealism, by focusing on small actions as the means to tackle big problems. Recalling a time in her U.N. tenure when the issues she faced—Syria, the refugee crisis—made her feel inconsequential, Power said she and her team made the decision to work on smaller solutions every day. One such project was a social media campaign for the release of 20 wrongly imprisoned women around the world, which eventually led to the release of 16 of the prisoners.

“The most important lesson of my career,” Power said, was remembering that “there is always something we can do, however small.”