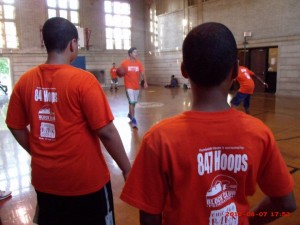 How much do you think a week-long boys basketball summer camp in the Chicago area costs? Two hundred dollars? Three hundred? Four hundred? If you guessed in that range, you'd be right, which is the reason that efforts by a group of Claremont McKenna College alumni are so remarkable.

In the summer of 2011, Aron Khurana ’09 co-founded a free, week-long basketball camp called 847 Hoops for at-risk seventh and eighth grade boys in Waukegan, Ill., just north of Chicago. Fellow CMC alumni Jordan Nottke ’10, Andy Doyle ’09 and Tejas Gala ’09 have also assisted with the camp. Both Nottke and Doyle were members of the Stag football team, while Gala and Khurana played basketball for the Stags.

847 Hoops serves a larger purpose than just basketball. Not only does the camp provide youth in lower income areas an exceptional level of coaching at no cost, the campers also get dinner at the end of each day and a visit from a variety of motivational speakers–– ranging from local professional and college athletes to doctors and lawyers. For at least a week each summer, anywhere from 50 to 100 campers are off the streets and out of reach of the gangs and mayhem that plagues their community. The most recent gang-related shooting in Waukegan happened on April 30, and similar incidents frequent the local news.

“Chicago is really affected by youth gangs and youth violence,” Khurana said. "Sports summer camps and after-school activities are a great way to keep kids off the streets and out of gangs. Camps also help youth with their confidence and positive thinking. We wanted to promote positive values in young people, and also bridge the income gap in terms of the basketball skills and coaching provided to kids in the area.”

The idea to start a free basketball camp for youngsters of all income brackets came to Khurana when he worked at a firm in New York City that promoted volunteering. He began to think about how he could volunteer his time in areas he was passionate about.

“Some of the volunteer opportunities in New York were projects that didn’t appeal to me, but I did enjoy volunteering. So, I thought, ‘What could I do that I would be passionate about, good at, enjoy, and that my friends would enjoy doing with me?” Khurana said. “What brought me back to running a basketball camp were all the positive things that I have learned in my life on the court, like discipline. A lot of the motivation I have gotten, and a lot of the positive role models I have come across, are from sports, particularly basketball.”

One such person for Khurana was his high school basketball coach, Darren Barndt. When Khurana came up with the idea to start 847 Hoops, Barndt was the first person he called. Both Khurana and Barndt believed there were talented up-and-coming basketball players in the 847 area code of Waukegan, but many of those players lacked quality coaching because of the high costs associated with top-level area camps.

“Kids from lower-income areas were not getting the kind of coaching and training that other kids were receiving in the fundamentals of the game,” Khurana said.

After some fundraising, the two co-founders, along with a large group of volunteers, ran their first camp with 50 kids in Waukegan, in summer 2011. In 2012, 847 Hoops expanded with a second site in Humboldt Park, a high-risk area on the West Side of Chicago. The latter camp was established, in part, thanks to a chance encounter between Khurana and CMC alumnus Carlos Rivas ’12 during a CMC alumni event. Rivas runs a youth organization in Humboldt Park, so he inquired about 847 Hoops. The two decided to add the Humboldt camp in 2012. With the two camps, the reach of 847 Hoops ballooned to 108 campers.

The goal now, according to Khurana, is growing the number of campers and site locations. If all goes as planned, a third camp will roll out next month, in July. And Khurana is in the process of getting 847 Hoops 501c3 certified as a nationally recognized nonprofit organization.

As 847 Hoops continues to grow, he says he is working to create a sustainable camp model that other cities can follow.

For information on the camp and how to support 847 Hoops, visit 847hoops.com.