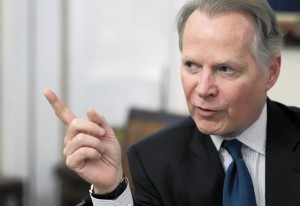 In case you missed it: SEE VIDEO OF ROUNDTABLE PANELS

The Dreier Roundtable will officially launch this Friday at an inaugural conference and luncheon focused on immigration policy. This innovative, bipartisan public forum is a collaboration with the Brookings Institution, the world’s premiere think tank. This new public policy initiative at CMC convenes leaders in politics, business, journalism and academia to hold constructive, substantive public discussions about issues that affect the future prosperity of the United States and the world. The Roundtable is named after former congressman and CMC alumnus Rep. David Dreier ’75, a distinguished fellow at the Brookings Institution.

The Dreier Roundtable’s inaugural luncheon and launch event on Friday Nov. 7 will address the complex issue of immigration reform in the U.S. Just days after the midterm elections of 2014, the panel of experts will examine the strengths and weaknesses of current immigration policy and debate the economic and political aspects of immigration reform.

“The Dreier Roundtable initiative demonstrates how Claremont McKenna is bringing the full spectrum of insightful opinions to our students’ world,” said Rep. Dreier, honorary chairman of the Dreier Roundtable and chairman of the Annenberg-Dreier Commission at Sunnylands.  “It’s our hope that by creating a forum and engaging some of the foremost thought leaders on these issues that we’ll come to creative solutions to some of our most difficult policy problems.”

The inaugural event will feature two panel discussions examining the immigration issue from economic and political perspectives, followed by a roundtable luncheon conference featuring Chairman Dreier and a distinguished panel of leaders.

The speakers for the Nov. 7 roundtable discussion will be:

The Dreier Roundtable is inspired by the career of David Dreier, longtime chairman of the House Rules Committee, 32-year veteran of Congress and recent appointee of Secretary of State John Kerry’s Foreign Affairs Policy Board. He is a trustee and alumnus of Claremont McKenna College and distinguished fellow at the Brookings Institution. The Dreier Roundtable is also the new home of the Annenberg-Dreier Commission at Sunnylands, which works to strengthen the free flow of goods, services, capital, information, ideas and people throughout the greater Pacific.