Nathaniel (Nathan) Tsai ’17 squared off against incumbent Democrat Chris Holden of Pasadena for a chance to represent California’s 41st District in the State Assembly in the recent midterm elections. Although he didn't win, Tsai garnered 41% of the vote-- an impressive showing for his first try at public office. Read this story, written in the lead-up to the election, on his run and what inspired him to pursue public office:

The district, anchored by Pasadena, 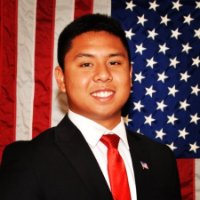 stretches from Altadena to Upland and includes Claremont. It is one of 80 California State Assembly districts and encompasses most of the San Gabriel Mountains and various foothill communities.

Tsai, borne in Glendale and raised in Alhambra before moving with his family to San Marino, is the youngest Californian to ever run for a CA State Assembly seat, and one of the youngest in the nation to run for a State House position.

“I've always wanted to make a difference and be the change I want to see in the world,” Tsai says. “Last semester while making plans for summer jobs/internships, I looked for a campaign to work on. My friend and I noticed that there was no challenger to the incumbent in the district. The daredevil part of me took that as a sign and after about 25 phone calls to different organizations and advisors, I was a candidate for office!”

At CMC Tsai (a government major) is active in the College Republican Club; he’s a Cadet in the U.S. Army ROTC program, and is a swimmer on the Claremont Mudd Scripps Intercollegiate Swim and Dive team.

As a candidate, Tsai is offering district residents “a new voice and a fresh mind." According to Tsai, every decision being made in State Legislatures across the nation and in Congress will impact the current younger generation the most. He feels it is time they had a voice in government.

“Our current politicians seem to have lost touch with their constituents and that is exactly what I intend to change,” he says. “I will not be a politician, I will be a representative. Talking to the people of the district, it’s not hard to understand what they want: efficient government and an ear. Last year the CA State Legislature passed over 600 pieces of legislation. Most citizens probably couldn't name 10, or even five of the bills passed. The people simply want to have a voice in government and have their elected officials be their representatives, and that is exactly what I intend to give them.”

For Tsai, the biggest challenge in the race, so far, has been fundraising. “There are a lot of supporters of my campaign that have believed in me since Day One and are financially supportive as well, but many people see me as an 18-year-old kid who is barely eligible to vote,” he says.

“I have had to prove my legitimacy to most voters, and I have – surprisingly – been successful,” Tsai adds. “Every voter, peer, donor, or any other person I have spoken to about my campaign has gone on to talk about me to others and have spread word of my campaign. I guess the major challenge has been convincing people that I know what I am doing and thus getting them to donate to the campaign. The major political challenge is that my opponent is an incumbent and holds a leadership position for the Democratic Party in the State Assembly.”

Tsai says he would not be in the position he is in today without CMC.

“The first two people I talked to about whether or not I should run were Professors (Jack) Pitney and (Ken) Miller,” he says. “I had taken Miller's Gov 20 class and was in Professor Pitney's American Political Parties class at the time. Being a government major at CMC I have to say that my professors were extremely influential in my decision to run for office. I ask them for advice often and they always take the time to hear me out.

“CMC has also provided me with a great resource: alumni,” he continues. “(CMC Trustee and former Congressman) David Dreier ('75) is a household name in San Marino (where I grew up). Being able to contact him and gain his endorsement has been an amazing experience and I have been able to learn so much from one of my childhood role models. In addition, having alums like John Faranda ('79) and John McDowell ('79 , who is also running for office) are the best support system I have ever had. The students, my classmates, have also been the most supportive group of peers I will ever meet. Basically, CMC's environment and atmosphere is essential to the campaign and what I stand for.”

Considering his youth, Tsai became interested in politics – obviously – at a very early age. “Two experiences really got me involved in politics,” he says. “The first was my participation in the San Marino High School Speech and Debate program. I did both oratorical type speeches as well as debate and while doing research I really began to pay attention to what was going on in the world. This was the time when things like the “Arab Spring” and Obamacare were going on. I saw a lot of good and bad, and that was when it really clicked to me: I wanted to help change the things that I saw as negative in society. Though I did not think of politics specifically, it was definitely an option I considered.”

The other experience was living through the 2008 election and subsequently watching the 2009 Presidential Inauguration on television. “I'm not sure if I can pinpoint what about it exactly piqued my interest,” he says, “but watching that particular inauguration inspired me to want to be President someday, and I guess my candidacy is a step towards that dream!”

Short of a stint in the White House, Tsai’s future goals include following in Congressman David Dreier's footsteps and representing Claremont, Pasadena, etc. in the U.S. Congress.

“I hope to inspire as many people as possible to get involved in government,” he says. “Were I to be elected, I would still encourage people to run against me because Democracy is about choices and if not all people are represented, then our democracy is not a true one.”

To learn more about Tsai’s candidacy, visit his website at: