Keeper of ‘The Flame’: Robert Faggen reflects on friendship with Leonard Cohen

“I never expected to have actual input in the poems. But he wanted a dialogue. I think he liked that I could serve as a sounding board for his ideas.”

Several times during an interview about his friendship with Leonard Cohen, Robert Faggen stops himself before getting too deep into a memory. Perhaps, after 22 years of shared personal moments, Faggen feels protective of the legendary songwriter and poet following his death in November 2016.

It is not the first time Faggen has been mindful about crossing this invisible line. Soon after they met in 1994, Faggen remembers asking Cohen if he could interview him for the Paris Review, a quarterly literary magazine. Cohen was reluctant, Faggen said, but he eventually agreed to do so in the kitchen of his Los Angeles home. Faggen turned on the recorder and they began talking. They ate tuna salad. Cohen broke out some fine whiskey. And as the conversation kept rolling, Faggen reached for the recorder and turned it off.

“I said to myself, ‘There’s something different about this,’” said Faggen, Barton Evans and H. Andrea Neves Professor of Literature. “I just wanted to talk to him as a friend.”

The Leonard Cohen that Faggen spent time with over the past two-plus decades was a private figure who lived in a modest mid-Wilshire house and wouldn’t replace his old Nissan. "A true bohemian to the end,” Faggen said with a chuckle. To Faggen, there was a sense that the man behind modern classics like Hallelujah, Famous Blue Raincoat, and Everybody Knows was happy with the respect he had earned throughout his career—Bob Dylan calling his songcraft “genius,” Kurt Cobain name-checking him on Pennyroyal Tea, Bono all but worshipping the ground he walks on, to name a few—but Cohen also “had enough fame to satisfy him, and he wasn’t seeking much more.” 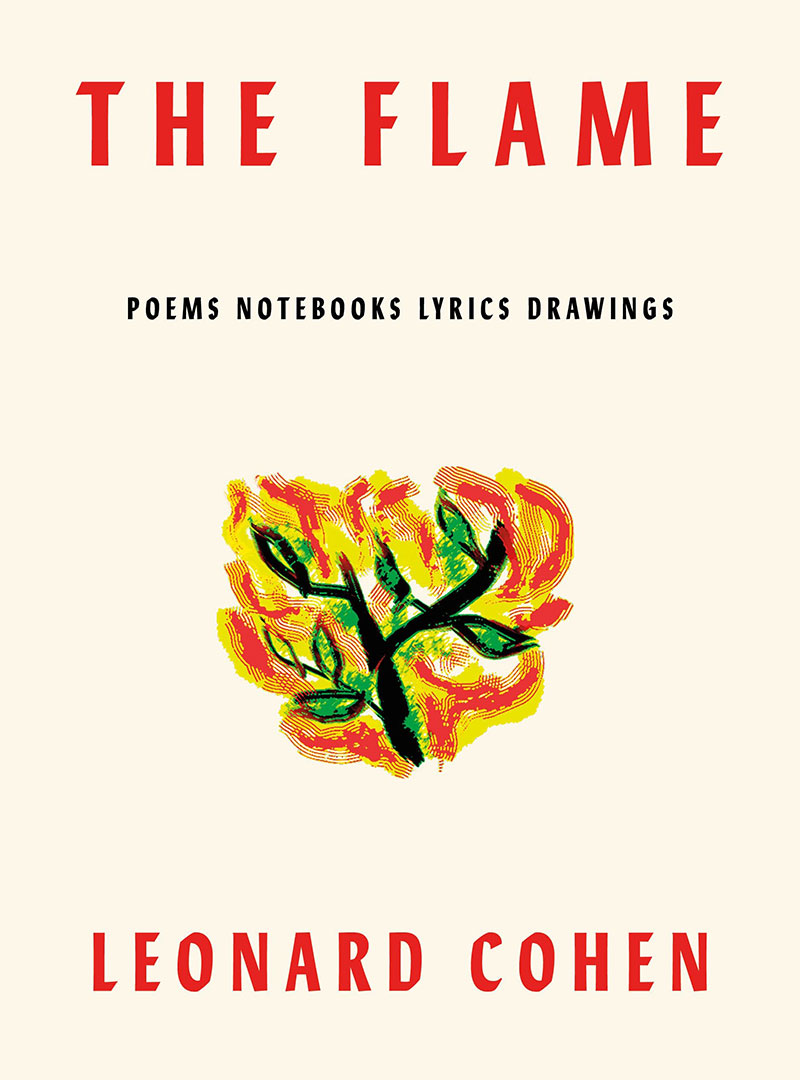 Which is why it is a bit strange for Faggen to be promoting Cohen’s latest gift to the world without him. Faggen edited and curated The Flame, Cohen’s posthumous collection of poetry, lyrics, journal excerpts, and self-portraits released this fall. However, work “never really consumed the basis of our conversations or interactions,” Faggen said.

“With us, it was always about friendship.”

‘Are you Leonard Cohen?’

Potato salad is the enduring memory of Faggen and Cohen’s first encounter.

While in the deli line at Wolfe’s Market in Claremont, Faggen noticed a man with a shaved head, dressed in black, muttering to himself about whether to get the red or German potato salad. It was Cohen, who was living at Mt. Baldy Zen Center. Faggen had also recently moved up on Mt. Baldy, and the two began a conversation after Cohen confirmed his identity—“I asked him, ‘Are you Leonard Cohen?’ He said, ‘Yeah man, I am.’” Faggen told him he worked at CMC; Cohen inquired about computer music programs at the college. They exchanged numbers and started hanging out at the Zen Center.

“We just got along well,” Faggen said. “Maybe he thought he could be himself around me.”

Faggen and Cohen later ended up in L.A., living about a mile apart. They continued to hang out at the corner Starbucks or to share oysters at a neighborhood joint. The bond grew with time and misfortune. In his later years, Cohen often wasn’t feeling well because of compression fractures in his back, which were symptomatic of a blood condition affecting his bones, Faggen said. When Cohen wasn’t up for leaving the house—he used a special therapy chair for his back—they would stay in and chat, sometimes watch documentaries. After a viewing of Steak Revolution, a food travel doc about searching for the best steak in the world, Faggen bought two ribeyes from an L.A. butcher and grilled them for Cohen. “We had a really great time with that,” he said.

Visiting over coffee or dinner eventually offered a peek behind Cohen’s creative curtain. It was gradual, Faggen said, maybe a decade into their friendship. Cohen would share drafts of poems as he worked on them. Faggen offered suggestions, and Cohen would often defend why he used a certain word or was fixated on a specific phrase. “I always found that part of him the most interesting,” Faggen said. “Leonard worked in his own way. Meticulous. He would spend weeks or month honing a line or thinking about a comma.” It was an intimate process Faggen was honored to partake in with such a talented and beloved writer.

“I never expected to have actual input in the poems. But he wanted a dialogue,” Faggen said. “I think he liked that I could serve as a sounding board for his ideas.”

Tending to The Flame

The healthy back-and-forth solidified a trust between Cohen and Faggen, which led to what would become The Flame. The duo worked on the book’s framework for about three years. Nothing steady, Faggen said, just Cohen casually workshopping poems between other projects, most notably, recording his critically-acclaimed final album, 2016’s You Want It Darker.

To help his friend make selections for The Flame, Faggen transcribed more than three thousand pages from a vast collection of notebooks, some dating back to Cohen’s teenage years. Cohen would start a poem in a journal, file it away, and revisit it years later. Other poems were new, including one called Kanye West Is Not Picasso (with its standout line, “I am the Kanye West Kanye West thinks he is.”) that earned The Flame some extra publicity after several musicians and music publications tweeted about it.

“I think he was quite pleased and amused by that one,” Faggen said of the Kanye poem, written in 2015.

The Flame, perhaps more than anything, demonstrates how Cohen’s creative energy burned brightly until his last breath. “Writing was his reason for being,” Cohen’s son Adam wrote in the book’s foreword. “His truest purpose.” For Faggen, who was tasked with organizing The Flame and identifying final versions of drafts Cohen had sent him, the honor of serving as his poetry handler was enormous. So was the responsibility he felt to not only Cohen’s legacy, but his fans’ expectations.

And yet more than Leonard Cohen the writer, Faggen will remember and miss Leonard Cohen the friend. Faggen was one of the few people regularly around Cohen during his final years. They had dinner the night before he died.

Faggen saw the worst of his companion’s pain and the best of his enduring artistry. They were both aware that he was dying—few people knew that Cohen had cancer; he died at age 82 after a fall at his home in the middle of the night—but it didn’t change how they approached their friendship.

If Faggen is resolute about anything, it is to emphasize that he was never a caretaker to Cohen. Sure, they talked about his medical maladies, but other people looked after Cohen’s health. As some private, final texts between the pair reveal, the two friends shared a relaxed, almost familial bond rooted in the best of the human spirit.

“It was a wonderful friendship,” Faggen said. They were confidants. Buddies. Guys who could “shoot the bull” with one another. Everything was on the table. And on the best nights, you can be sure there was a bottle of good whiskey there, too.