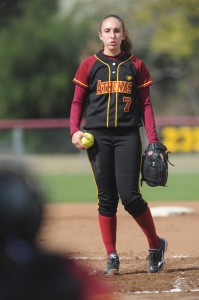 Claremont-Mudd-Scripps softball player and Claremont McKenna College sophomore Hayley Schultz  is featured in the March 4, 2013 issue of Sports Illustrated’s “Faces in the Crowd” which is SI's weekly feature that highlights standout amateur athletes and has been doing so since 1956. The issue is available here online and will be on newsstands on Monday, March 4.

Schultz, a right-handed pitcher, threw a complete-game five-hitter to defeat preseason NAIA No. 1 Cal State-San Marcos 6-0 on February 9. She became just the second pitcher to shut out San Marcos in 67 games dating back to last season. She also threw a complete-game shutout in the Athenas' season opener (1-0 over Azusa Pacific). Schultz, last season's Southern California Intercollegiate Athletic Conference newcomer of the year and National Fastpitch Coaches Association second team All-West Region selection, is 4-1 with a 1.44 ERA this season.

It is believed that Schultz is one of the first, if not the first CMS student-athlete to be featured in Faces in the Crowd.