A ghost in the old admission office?

In a now-forgotten corner of campus, currently occupied by part of the Kravis Center, there once stood a decayed but beloved building.  In a former age, it had been the toast of a growing and flourishing campus scene and served as the first location for the illustrious Athenaeum. In another incarnation, the building also had been The President’s House. As the home of CMC’s president, it was once the brightest gem in CMC’s crown; a Spanish Colonial-style home that boasted windowed walls, a breezy courtyard, and an imposing yet cheerful fireplace.

Time’s bending sickle eventually claimed the building, transforming it into the well-worn, but well-loved, Admissions and Financial Aid building.  Long ago, in the furthest of back corners, in the smallest of tucked-away closets, student assistants went spelunking through caverns of paperwork and used the wisdom of their elders to manage the dreaded frantic phone calls that sometimes came from parents.

Back closets in old buildings, as we all know, are also where the dark dwells and fear lives.

Rumors of a spirit haunting the President’s House floated through the various offices, sticking to a doorknob here, winding ’round filing cabinets there, and (of course) these rumors eventually made their way into the topmost corners of the dank and dreary attic where the oldest files were kept.  It was said that the spirit of a former Ath speaker, disappointed by the turnout at her event, lurked in the shadows, creaked her way up the stairs, and slammed doors shut to revenge herself upon those who remained at CMC.

It was said that spiritualists and santeros had been consulted to help the college rid itself of the specter.  They tried everything, from counseling sessions, to group hugs, and even chocolate cookies, all to no avail.  She would not budge.  It was said, in fact, that the house itself loved the ghost and would not be parted from her.  And so, She remained.

The creaking of the building and the rustling of who-knows-what reminded us all of Her presence.  Mostly, She let us do our work.  That is, until one sunny afternoon as I typed away in the tiniest of miniature closets and felt… a Presence.  I looked to my left.  The head administrative assistant was working furiously on an Important Report.  I looked to my right.  I saw nothing but the filing cabinet’s gape-mouthed collection of yellowing files.  I continued to type.

Suddenly, I heard a slight rustling noise above my head.  I looked up.  Above me the ceiling gently drooped under the pressure of some unknown force.  Before I could react, a stream of liquid dropped from the distended ceiling tiles directly onto my head.  I screamed aloud, pushed myself away from the desk, and collapsed onto a nearby filing drawer.  My coworkers, from all parts of the Admissions and Financial Aid offices, came flying to my aid, no doubt hoping to catch a glimpse of the elusive spirit.

After expressing their disappointment that our ghostly friend was not to blame for my outburst, an expert in ceiling-related maladies was brought in.

Two days later, we learned who was to blame for the strange ceiling phenomenon.  Our office guest was none other than Didelphis virginiana, or the common opossum.  She had taken up residence in the house some months before and had created quite the charming nest in the crawl space above our offices.  I will leave it to the reader to guess what, exactly, had fallen on my head during the dreadful catastrophe that led to her discovery.

Does this mean, then, that the old President’s House was haunted only by a stray rodent?

I suppose it depends upon what happened to the rodent; for, you see, we never heard from the animal control specialist after he removed the opossum from the house.  Perhaps the ghost of the opossum returned and remains with us.  Perhaps the spectral scorned Ath guest was real and gained a rodent familiar who now helps her vent her frustrations.  Perhaps, when there’s an unidentified creak or groan in the Kravis Center, what students are really hearing is a reminder that we have yet to rid ourselves of our unwanted spectral visitors.

And perhaps, when you hear a strange noise above your head as you sit in the Kravis Center, you will remember this tale and think twice before looking up.

Crockett ’01 is visiting assistant professor of literature and the associate director of CMC’s Center for Writing & Public Discourse. Her story is adapted from a version published in “Myths, Legends & Tall Tales II: A Book of CMC Stories.” 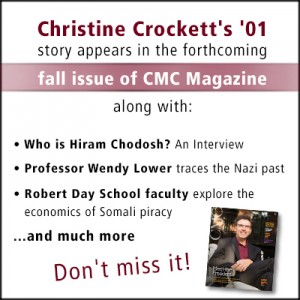