A mural with a 'mountainous' subject

Mussorgsky, Mt. Baldy, childhood memories — a new mural by acclaimed artist Mary Weatherford captures a range of her emotions and reactions, especially her responses to Claremont's landscape and environment.

Tuesday night the mural's installation in the Marian Miner Cook Athenaeum was celebrated with a dinner and talk held in the Security Pacific Dining room, where the 117" high x 234 " wide canvas covers an entire section of the room's southern wall.

Her new mural is the result of her time spent teaching this past year at CMC as a Podlich Distinguished Fellow under the auspices of the Gould Center for Humanistic Studies.  This month's installation also coincides with the announcement that Weatherford has won the 2014 Artists' Legacy Award, which the Artists' Legacy Foundation presents annually to honor the work and achievement of an artist or sculptor.

At CMC, Weatherford taught a five-part seminar on contemporary painting, and, in the fall of 2015, the Gould Center will publish the first major book on Weatherford’s work, documenting her recent neon paintings and giving an overview of her 25-year career. 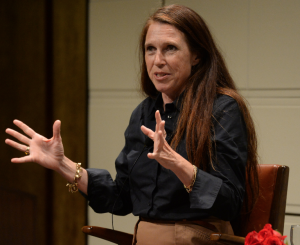 "I wanted to make something unique that is connected to this campus," she explained (pictured, left) during a public conversation with Professor Robert Faggen, the Gould Center's director. " What makes this place so special? Well, there's a mountain not very far from here. I kept thinking about it."

In the new mural, titled "From the mountain to the sea," layers of earth-and-stone colors — elemental greens and varieties of black —  mingle with blues that "seep like water, like the ocean," she said. "I realized I wasn't thinking only of Mt. Baldy but of the ocean, too."

She said she also kept thinking of other things as well —Van Gogh's double-square canvases and the orchestral force of Mussorgsky's "Night on Bald Mountain," which her father played for her when she was a child.

"I don't think this space will ever be the same after tonight," President Chodosh said. At the conclusion of the evening, he expressed thanks to several people for their leadership and vision in nurturing the arts at CMC, including Professor Faggen, Trustee Christopher Walker '69, and late Trustee Bart Evans '70.

Weatherford spent a year creating the mural — and the Athenaeum will serve as its home for the next year. This will provide students with a special opportunity to closely examine the artist's layerings of color, gesso, and marble dust, and her signature use of neon lighting.  Two thin neon tubes in bright orange and yellow extend across the canvas.

Weatherford has incorporated neon in other paintings, including both a New York and Bakersfield series of artworks. In “From the mountain to the sea,” the electrical cords conducting the flow of argon gas into the tubing to create the neon effect are visible across the painting. The artist said it was a conscious decision based on the rule of form following function.

"Light carves a hole in your vision," she explained. "You can't look at the painting and the light at the same time. It's a perceptual oddity."

Later, during a short Q & A, Weatherford was asked about her favorite stage of creation.

"When it's done," she said, drawing laughs from the audience. "No, no, it's true. What I enjoy most is the end, when I can see that it finally works."