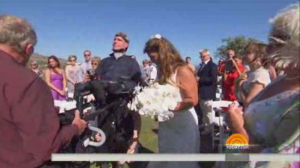 Nieto walks Lindsay down the aisle, as seen on this morning's (July 6, 2014) Today Show.

Of all the moments in Augie Nieto’s ’80 P’08 life, few will be as momentous and memorable as July 5, 2014, when Nieto walked his 25-year-old daughter Lindsay down the aisle. That’s because Nieto, who has amyotrophic lateral sclerosis (ALS, or Lou Gehrig’s disease) wasn’t expected to be alive this long. After his diagnosis in 2005, the husband and father of four was told about the degenerative disease’s quick action. The life expectancy for an ALS patient averages about two to five years from the time of diagnosis; about 20 percent of patients will live five years or more.

Nieto’s determination to reach this singular goal for his daughter’s big day is not surprising. This is a man who hasn’t let “can’t” into his vocabulary, who has raised about $40 million for ALS research through his Foundation, Augie’s Quest. “You can either celebrate what you can do, or mourn what you can’t,” he has said.

The Today Show, which has followed Nieto through the years since his diagnosis, aired footage of the proud father walking Lindsay down the aisle on Saturday, in this morning’s brief segment; watch it here.

On Sunday July 5, Orange County Register columnist Marcia Smith wrote a touching story about the beachside wedding, which included excerpts from her interview with Nieto at his home.

You can read her story, here.

In 2007, Nieto helped write about his devastating diagnosis and his challenges in his book with co-author T.R. Pearson, Augie's Quest: One Man's Journey from Success to Significance.

Wrote Jerry Lewis at the time of its release: "Augie is an invaluable partner with MDA in the war against ALS because of his amazing inner strength. He refuses to give in and he'll never give up. 'Surrender' is not in his vocabulary."