Art by Distinguished Chinese Artists now on Display at Athenaeum 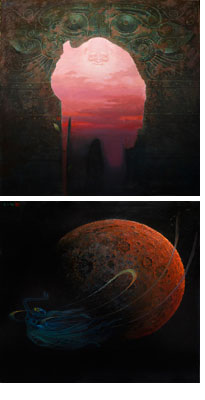 An exhibition of artwork from renowned Chinese artists Ertai and Maya Gao is currently on display at the Marian Miner Cook Athenaeum at Claremont McKenna College.
The inspiration for the Gaos' work is taken from the graceful curves of traditional calligraphy, the themes of Chinese legends, and the elegant movement of ancient Buddhist cave paintings. The selection of art on display is based on Chinese myths and incorporates political allegories. Included in the exhibition are two sets of calligraphy scrolls based on the poetry of Ertai.

Throughout his life, Ertai has openly advocated for freedom of expression in China. In 1957, he was sentenced to "reform through labor" in a camp in the Gobi Desert for writing, "On Beauty," an essay which stated that freedom was essential to the creation of beauty, and that beauty was an expression of freedom. Disease and starvation killed approximately three-fourths of the inmates, but Ertai survived. His book, In Search of my Homeland: A Memoir of a Chinese Labor Camp, describing his sentence to the labor camp, his fellow detainees, and the political persecution of his family. Ertai and his wife, Maya, fled China for the United States after he was wrongly arrested in the wake of the Tiananmen protests in Beijing in 1989.

For more than 30 years, Maya has worked as a professional artist and art instructor. Her work appears in the Leiyin Temple of Taiwan and has been on exhibit in New York, Taiwan, and Hong Kong.
A reception honoring Ertai and Maya Gao is scheduled for 3 p.m. on Friday, Feb. 12 in the Security Pacific Room of the Athenaeum.

The exhibition is open to the public and can be viewed from 9 a.m. to 3 p.m., Monday-Friday at the Marian Miner Cook Athenaeum, 385 E. Eighth St., Claremont. The Athenaeum may be closed to the public on holidays and for scheduled events. For more information about viewing times, call 909-621-8244.

The exhibition is co-sponsored by The Family of Benjamin Z. Gould Center for Humanistic Studies and the Marian Miner Cook Athenaeum at Claremont McKenna College.