As students look to the future at Commencement, one classmate is remembered 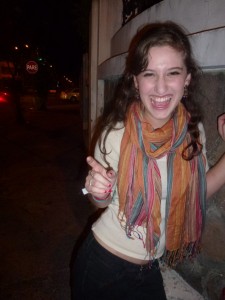 Tamar Kaplan would have graduated with the Class of 2014. Students wore light-blue ribbons with her initials for Commencement.

Commencement is a time of anticipation and forward-looking for students on the cusp of their futures. It is also a time of reflection on things accomplished, including the building of lifelong relationships and friendships. For many this May, those reflections included fond memories of a classmate who will be sorely missed.

Last January, Tamar Kaplan ’14, who would have graduated with the senior class this year, died in a Bolivian hospital from injuries sustained in a car accident, after a semester abroad.

A Minnesota native and a Philosophy, Politics and Economics (PPE) major, Kaplan was the recipient of a merit-based McKenna Achievement Award and an award-winning member of CMC Mock Trial. As a junior, she had been involved with The Advocates for Human Rights, a Minneapolis-based nonprofit organization addressing social injustice in the United States and abroad.

To honor her memory, students at the College’s 67th Annual Commencement on Saturday wore light-blue ribbons bearing her initials.

Cynthia Neas, assistant to the Dean of Students, says the ribbons were prepared and distributed to seniors at lineup.

“Laila Heid ’14, a close friend of Tamar’s, approached me in January about wanting to honor and remember Tamar at Commencement this year,” said Neas. “With the help of Tamar's friends––seniors Haley Patoski, Anoma Bhat, Mary Waterman, Lynsey Chediak and McKenzie Javorka, along with Laila and Dean of Students Mary Spellman–– it was decided to provide ribbons to the graduating seniors to be worn during the ceremony.”

"We chose a bright and cheery color with her initials so that members of the class could carry her with them during the ceremony and think of her beautiful, sunny smile and heart,” Spellman said.

" I was proud to wear the ribbon in honor of Tamar, as we shared a WOA trip together,” said senior Annika Jensen. "Even more so, I wore the ribbon in support of her best friends Laila, Haley, and McKenzie, whom I am lucky enough to know well. I know it meant a lot to them to see the support of their friends honoring someone they loved dearly, and I was glad to be part of  that."

A moment of silence during Commencement also paid tribute to Tamar's memory.

Haley Patoski was touring Bolivia in a Land Rover with Kaplan at the time of the accident. (Read more in this January 2013 article in The Forum.)