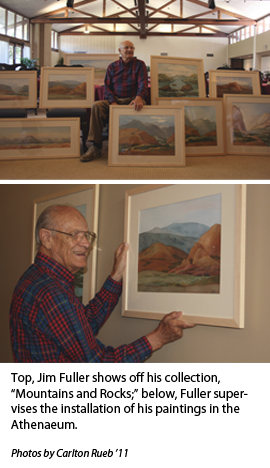 This academic year, the Marian Miner Cook Athenaeum will be enveloped in a world of watercolor as the paintings of James Fuller, Professor Emeritus at Scripps College, will be hung on the walls of Security Pacific Dining Room. The collection, titled "Mountains and Rocks," depict landscapes, rocks, and streams that inspired Fuller around Claremont, the Sierras, Lompoc, and other locales. The pieces featured at the Athenaeum have all been painted in the last few years and will be making their public debut.

Fuller grew up in North Dakota and attended Chaffey College to earn his undergraduate degree. During this time, Fuller took his first art class at Scripps College and fell in love. He continued studying art at Berkeley and eventually earned his M.A. in fine arts. He began teaching at California State University-Los Angeles, moved to University of California-Davis, and eventually ended up back at Scripps College in 1966. Fuller's earlier work was contemporary and included a variety of mediums including oils, sculpture and print-making.

These days Fuller has taken to walking into nature and painting anything inspirational. "It's a process, painting, making myself being there in that place...finding out what that place is," says Fuller. "If the painting is well enough formed, there's a chance of communicating that place to the observer." Watercolor has become his medium of choice. "It's this crazy watercolor. It's a strange medium putting little puddles of paint on paper to make an image. Seems like a strange process to me," he said. This curiosity about the medium has driven and inspired James Fuller to create beautiful, light, and sweeping artwork that shows an appreciation for the natural world. His art will create a stunning backdrop for the Athenaeum speakers throughout the year.

There will be about two dozen pieces on display in Security Pacific. An opening reception for the public debut of the work will take place on Friday, September 17th, from 3:30 to 5:00 PM, and is open to the public. -- Carlton Rueb '11