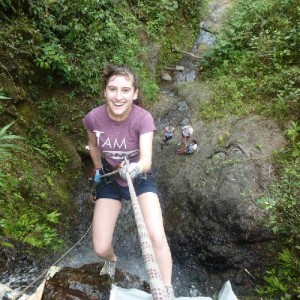 Family and friends gathered on a sunny, cold day to say the most difficult kind of goodbye: to a beautiful young person with a bright smile and a bright future suddenly cut short, Tamar Kaplan ’14.

Tamar died on January 6 from injuries she received in a car accident while traveling in Bolivia.

The memorial service was held in the CMC junior's hometown, St. Paul, on January 14 in the Alexander Hill Ballroom at Macalester College, where her father Daniel is a mathematics and computer science professor.

Many members of the CMC community were among the mourners, including alumni, current students, Associate Director of Annual Giving Andrew Brewer, Director of Off-Campus Study Kristen Mallory, and Dean of Students Mary Spellman. A reception followed at the Olin-Rice Building on the Macalester campus.

“The ballroom was overflowing with people from all stages of Tamar’s life,” recalled Spellman. “It was an honor to be included in the service for Tamar.”

“It was important to be there. I’ve known her since she was a freshman,” explained Brewer, who worked with Tamar when she was a Phonenite volunteer. “It was so good to see so many of her loved ones sharing stories and spending time with the family.”

Music at the service was provided by a violinist friend of the Kaplan’s, and other friends and family members, including Tamar’s boyfriend Talon Powers, counterbalanced the violin’s soft, plaintive tones with their warm, humorous memories of Tamar.

Their stories touched on so many of her passions, ranging from her love of junk food and her friendships to her appetite for learning, and adventures in South America.

Her most recent adventure had been to Ecuador, where she spent the fall semester with a host family in Quito.

“Everyone knows how hard it is to get out of the CMC bubble,” Tamar wrote in the CMC Forum in November in “Letters to Home: What I (Don’t) Miss About Green Beach,” “but in Ecuador you can get to the beach, the Amazon, or the Andes in an 8-hour, $10 bus ride.”

One thing is certain, Tamar popped that “CMC bubble” with real gusto. At CaringBridge.org, the Kaplan family has set up a tribute page for Tamar and posted photos that show her hiking, zip-lining and kayaking her way through her semester abroad. (Everyone in the CMC community is invited to post remembrances there or make donations in her memory. Already, the Kaplan family reports on that tribute page, the Minnesota Debate Teacher’s Association has created the Tamar Kaplan Student of the Year Award.)

Other photos show her with her family and her CMC friends, embracing them with as much love as she embraced the thrill of venturing out into the world beyond CMC.

Spellman said that the entire Kaplan family––Daniel, Maya, and their daughters Liat and Netta—displayed immense grace and poise during the memorial service and the reception that followed.

The Kaplans were also extremely generous and welcoming once their difficult day was over.

“The Kaplan family opened their hearts and literally their home to the many members of the CMC community who were present,” she said.

One of the speakers during the service was Tamar’s classmate Haley Patoski ’14, who had been involved in the accident with Tamar. Her efforts to help her injured friend were nothing less than heroic.

Confronted with basic medical help and a language barrier, Haley dealt with the local doctors and with Tamar’s medication needs, and she stayed at her bedside until the arrival of Tamar’s father, who accompanied his daughter on a long ambulance ride to the city of La Paz. During the trip, Tamar’s condition worsened, and she was rushed to the nearest hospital, in nearby Oruro, where she slipped into a coma and died.

Another speaker was Tamar’s youngest sister, Netta. She told everyone how she missed Tamar and wished that she had been able to spend more time with her big sister. It was a wrenching, powerful moment among many powerful moments during the service.

Tamar had accomplished a great deal and touched many lives in her 20 years. She balanced the demands of a PPE major with her involvement in CMC Mock Trials, her travels, and her work for Student Outreach Utilizing Resources and Community Exchange (SOURCE), a student-run organization that helps nonprofit groups.

“Tamar always brought contagious enthusiasm to the table,” said Katherine Johnson ’13, who worked with Tamar at SOURCE and was contacted for this article while she was out of the country. “Through our work together we also became close friends and I greatly respected her advice and ability to make me laugh. Tamar will be greatly missed professionally at SOURCE but even more personally by those of us who were lucky enough to have her in our lives.”

Brewer said she was so very accomplished, yet she wore her brilliance lightly.

“Tamar was one of the smartest students I ever met,” he said, “but she never took herself too seriously, and I think that’s one of the great things that was so appealing about her.”

“Tamar was bright, humble, and lighthearted,” said Julia Bard ’13, who also worked with Tamar through SOURCE. “Her work with non-profits and abroad was a testament to her strong compassion, her eagerness to learn, and her strength as a leader.”

Junior McKenzie Javorka ’14 shared a close-knit bond of friendship with Tamar and Haley. The three students started off, she says, as “tentative WOA buddies” and soon grew “into the closest of friends and suitemates” as they made their undergraduate journey together.

Her response to the loss of her dear friend encompasses what many are feeling on campus today.

“How can I begin to describe the woman Tamar Kaplan was while she still lives so vividly in my memory?” said McKenzie. “It is impossible to sum up a person like Tamar, or to begin to comprehend the brightness she brought to my life…. The world has lost one of its brightest, most beautiful spirits. Tam, you are incredibly, incredibly loved.”

The CMC community will have an opportunity to pay tribute to Tamar Kaplan at an upcoming campus memorial service. More information will be coming soon.