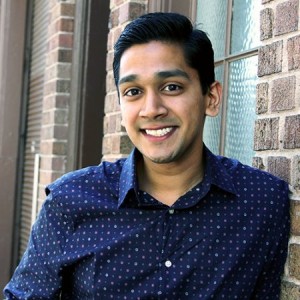 Abhi Nemani ’10 has just been named the first Chief Data Officer (CDO) for the city of Los Angeles, joining Mayor Eric Garcetti's team. In his new role, Nemani leads the administration’s efforts in propelling data-driven policy and performance, with an eye toward making L.A. a platform for citizen engagement and entrepreneurship.

A PPE major at CMC, Nemani was also a star-member of CMC's Mock Trial Team, winning two All-American attorney awards when the team went to the American Mock Trial National Championship in spring 2010.

Nemani took time out of his “ramp-up” in the new job to field our questions about data’s role in city governance, mentors and Claremont McKenna and his favorite “piece” of data.

CMC: Tell us a bit about the job; what does it entail, exactly? Abhi: My responsibility as Los Angeles’s first chief data officer is to improve how the city uses its data to achieve results. In the 21st century, all institutions, and in particular public ones, need to take advantage of the data they have available to them to guide both policy decisions and their implementation. My role will be to drive data-driven performance management and decision-making within and beyond city government; build intergovernmental partnerships to use data for regional collaboration and solutions; and most broadly, make Los Angeles a platform for broader civic engagement through data.

Example after example would emerge of how when governments leverage their data–– either through opening it for community engagement or analyzing it for better decision making–– interesting things started to happen. New apps would be built without any government involvement; connections would be made from agency-to-agency; and efficiencies could be found within the institution. Take public transit for instance. You can now download one of hundreds of public transit apps in the App Store. It will likely work in most major cities (often with real-time updates), and cities themselves are using that information to continuously improve the system. Data plays a central role in making all that happen.

CMC: How did you get the job? Abhi: Before joining the administration, I worked for Code for America, a nonprofit that operated hand-in-hand with city governments first, across the country, to help them approach technology in more modern ways. Think of it like a “Peace Corps for geeks:” teams of fellows would spend a year tackling a civic challenge with their technical skills. These fellowships were designed to test a hypothesis that our public institutions, particularly those at the local level with their operational responsibilities (e.g. trash collection, fixing potholes, etc), were ripe for change by the very technologies that are so dramatically affecting our private lives (e.g. the Internet, mobile devices, etc.). Some solutions were as simple as making licensing a small business easy, and online; others more complex like an analytics dashboard for the courts system. No matter the technological outcome, all had in common a lesson that regardless of the app, it’s the people, processes, and policies in place that make it stick.

Eventually— as with any startup, even the nonprofit kind— I was playing as much of a policy role as a technological one, helping cities design policies and programs for what’s called “civic innovation.” It was through this mix of experiences that I eventually came into contact with Mayor Garcetti's administration through a series of conversations with Rick Cole, deputy mayor for budget and innovation, and a longtime veteran of SoCal local government. He explained to me that the Mayor deeply valued the role data should play in the city— in fact making an open data executive order one of his first priorities— and indeed they were looking to fill the role of chief data officer.

For me, it’s a humbling opportunity to go from working with governments to working within one— and it fulfills a personal goal. And the ability to do this in Los Angeles, with the team the Mayor has assembled, with the city’s scale and diversity–– and of course with its proximity to CMC–– is what makes this truly an exciting opportunity for me.

CMC: You are now officially part of Mayor Garcetti’s “team.” What will that working relationship be like? Abhi: The CDO position is housed within the Mayor’s Office for Budget, Innovation, and Excellence (MOBIE), led by Rick Cole. This office serves as a kind of horizontal function across the various city departments (e.g. public works, police, fire, etc.), with the goals of promoting performance-based management, decision-making, openness and collaboration.
What’s exciting about joining the administration at this point is that there’s already tremendous momentum behind the use of data in the city. One of Mayor Garcetti’s first executive directives was a commitment to open data. This began an impressive series of actions that already are having an impact little more than a year later. For instance, you have unprecedented transparency into how taxpayer dollars are spent (losangeles.opengov.com); and you benefit often, without even knowing it, by your government’s use of data to be more efficient and smarter (performance.lacity.org). Plus, a local “civic hacker” (that’s the good kind of hacker, the kind that uses data to help the city) community is emerging, with multiple “Hack for L.A.” and “TechL.A.” events that have drawn hundreds of people into the process. These developments excite me to explore what’s next.

CMC: How did your education at Claremont McKenna play out in your achievements? Abhi: CMC gives you the space to try new things, and in fact encourages you to push yourself to do as much as you can in the short time you’re there. For me, that meant the opportunity to be very involved in campus activities, ranging from the Rose Institute and Mock Trial to student publications Forum and Claremont Port Side, while keeping up a healthy academic schedule. Because of CMC’s size and respect for its students, those activities had a real-world component, which I think is unusual: the Rose Institute lets its researchers work collaboratively with local government officials, for instance, and most of the extracurriculars are student-run, not professor-dictated. This makes for intensive, practical, and rare learning experience.

CMC: Did you have any particular mentors at CMC? Abhi: Each of my PPE professors (Paul Hurley, Ward Elliott, and Brock Blomberg) played a significant role in my academic journey, but also coached me professionally and personally. Professors Asuman Aksoy and Alex Rajczi pushed me to continue in my intellectual pursuits even beyond my major, which has proven invaluable. Then there’s the host of friends and peers who put up with me through years of too little sleep.

CMC: What is your advice to students on maximizing their time and skill-set at CMC? Abhi: Make something of your own. The College has a support network of resources, expertise, and encouragement that make very little of what you hope to accomplish unobtainable. It’s a safe place to push yourself and try new things, and if you’re successful–– or even if you’re not–– you’ll leave that place with more confidence, experience and curiosity.

CMC: Do you have a favorite piece of data that you like to cite? Abhi: There two pieces of public data you probably rely upon every day: weather data and transit data. Put simply: Where are you going, and what are you going to wear? Of course, if you’re in sunny Claremont, those things likely will not change much day-to-day. Instead, then, I’ll talk about health inspection scores.

You’ve maybe seen hanging on the wall or on the window of your favorite restaurant a big letter or number (hopefully an “A” or a “100") indicating its health rating. Local governments (often counties) perform ongoing checks at all restaurants to monitor public health concerns, such as food-borne illness, hygiene and the like––the kinds of information (read: data) that you’d likely want to know before you swing by for your next meal. Too often, it’s difficult data to find. It’s hidden in the back of the restaurant, or if it is online, it’s on a city’s website that you don’t even know about.

My favorite part of this story is how, on a recent evening, I was going to dinner with a friend in San Francisco, who knew what I did for a living. And I could swear I had told her about this project. She was looking up a restaurant on Yelp and said, “Oh hey, did you know Yelp now has health inspection grades?”

We’ll hopefully see more of these kinds of data partnerships and integrations in the future, as more companies and startups see the value in civic data, and more of it becomes available.

CMC: What are your future goals in the city job and after? Abhi: Los Angeles’ size, scale and diversity present a real opportunity. Entering a city of nearly 4 million residents and a city government employing more than 40,000 public servants, focus is essential: What are high-priority opportunities to either open data up to the community, or use it internally to support data-driven policy and performance? That’s the first question I’ll need to answer. Beyond that, I’ll be looking to find connections within the government, within the community, and in other governments, to make sure I’m not just talking about data for the sake of data. Instead, our constant goal is to put data to work.

After this role in the city, I’ll be eager to see how this field of “civic technology” has changed or progressed. I find my passion lies at the intersection of technology and government— or more specifically, how new tools let us rethink the way our public institutions work. It’s unclear what’s next for me, but I suspect it wouldn’t be far from that intersection.

CMC: What book or treatise has been most helpful to you? Abhi: Tocqueville keeps me honest. His insight into the interplay between self-interest and public life may bear more relevance now than they did 200 years ago, given the challenging numbers we see nationally in civic participation and trust.

It’s either that, or the “collected works” of Aaron Sorkin (still in progress).