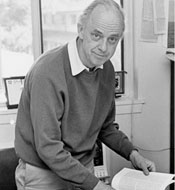 He was known as a variety of things: tough grader, intense academic, devoted professor, walking encyclopedia, obscure scavenger hunt organizer andin the words of his wife, Juanitaa beautiful man, in whose memory former students have been calling and e-mailing to share their deepest sympathies. On Thursday, October 6, 2011, CMC lost teaching legend Harold William "Bill" Rood, the W.M. Keck Professor of International Strategic Studies, Emeritus. Dr. Rood died at his home in Manchester, California, in Mendocino County, after battling cancer. In addition to being a professor emeritus at CMC, he also was a Fellow of the Claremont Institute.
Dr. Rood made Claremont McKenna his teaching home for more than three decades. He joined the College in 1962 as an assistant professor of political science, but his distinguished career reached across the world. He studied at Stanford University, Shrivenham American University in Berks, England, Worcester College at Oxford University and the University of California, Berkeley. Graduate school took him to the London School of Economics and Political Science, the University of London, and back to UC Berkeley. He had a master's degree in international relations and a doctorate in political science from Berkeley becauseas he once joked"it was easier than history."
His striking academic record was matched by an equally impressive military vita. He enlisted in the Army in 1942 and was a private infantryman in Patton's Third Army in the European theater of operations, then served as a French language officer, an order of battle officer, a combat intelligence staff officer, and a strategic intelligence analyst. From 1958-1974, he taught at the Sixth Army Area Intelligence School in San Francisco.
Dr. Rood's pride in his military service could be infectious. "One of my favorite memories of him was when he asked, rhetorically, if the United States would get the attention of the Russians if we sailed a carrier battle group into Helsinki Harbor," recalls Trustee Steven Eggert '82 P'15. "Since then I always appreciate the value of having a strong Navyand lots of aircraft carriers. And that's coming from an Army guy."
At the time Dr. Rood joined CMC in the early '60s, he retained a role at the Stanford Research Institute and settled in Claremont. About six years later, when smog became a health issue for one of his daughters, he relocated his family to Menlo Park, but willingly flew back and forth to CMC to teach. Former colleague Jerry Garris marveled that despite the commute, he was a vibrant and important presence on campus, making his passion for his work, and the powerful interactions with students, clear. At the time of Dr. Rood's retirement in 2001, Garris called the CMC professor "one of the great inquiring minds on campus. Being around him makes you think twice and dig deeper," Garris said. And he had a remarkable impact on his undergraduates. "He seemed to always have a group of students that formed around him, like the nucleus of an atom has electrons," Garris said. "They were kept together by a magnetic quality he had."
That impact undoubtedly extended to former chairman of the CMC Board of Trustees Robert Day '65, president of the W.M. Keck Foundation. It was Day who encouraged the Foundation to endow a chair in strategic studies at Claremont McKenna.
"Bill startled and shook up generations of CMC students," recalls longtime friend, CMC professor emeritus and former Rose Institute director Alan Heslop. "He taught them to distrust much of what passes for news, to question idealism, to look beneath the surface of events to geo-political realities, and to face up to the perils of life in an uncertain world."
"Professor Rood was by far the most important educator I have ever had," Chairman of the CMC Board of Trustees Harry McMahon'75 P'08 P'09 said. "He was an extraordinary American...I would audit Rood classes (which we termed Rood raves) that I couldn't fit in my schedule."
Dr. Rood's wife, Juanita, says her husband was punctilious when speaking to everyone.
"He unfailingly used whatever title or honorary form of address due, as an indication of his respect," she recalls. And his academic achievements, while stellar, she notes, were not to be outdone by his "richly developed humor and impeccable courtesy. I have had the great good fortune of knowing two true gentlemen in my life," she says, "and the blessing of being married to one of them."
Two Professor Rood legends were his identification projects and "Rood Awakening" breakfasts in Claremont's Village. The former often sent students on a hunt for obscure items, such as the names of events, ships, rivers, or towns. "He would give us a picture of something, and he would send us off to find out what it was and why it was significant," Clint Greenbaum '79 recalled in the spring 2011 issue of CMC, remembering his favorite CMC class: Rood's Politics and Technology course. "It was literally a scavenger hunt. No clues, no textbook. This was before the Internet. I had to run to all the libraries on the campuses."
Dr. Rood was the author of the 1980 book, Kingdoms of the Blind: How the Great Democracies Have Resumed the Follies That So Nearly Cost Them Their Life (Studies of Statesmanship of the Winston S. Churchill Association). According to the Claremont Institute, he also authored numerous essays and served as executive editor of the Institute's Grand Strategy: Countercurrents. In 1967 he also wrote an award-winning essay, "Distant Rampart," for the Naval Institute's journal, Proceedings. In 2007 he was awarded the Claremont Institute's Salvatori Prize in the American Founding. He also taught in the Institute's Publius Fellows Program for more than two decades, starting in 1979.
Dr. Rood is survived by his wife, Juanita, and daughters Hilary and Elizabeth.
Although memorial services are pending, family members say they are planning a military burial in early December. More information about those services will be available at a later date.