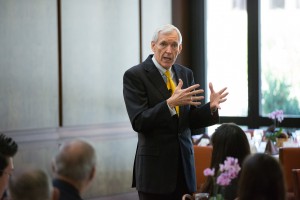 In the rarified world of CMC overachievers, Tom Leppert ’77 holds a special place: he has been equally successful in both the public and private sectors as CEO of several companies, White House Fellow during the Reagan Administration, and mayor of Dallas, Texas.

Leppert’s resume shows a man constantly expanding the limits of his own comfort zone. Who better then to lecture about “Contrasting Leadership in the Public and Private Sectors” at a luncheon held at the Marion Miner Cook Athenaeum on Sept. 24?

“I have been fortunate to be a member of large organizations and have a real appreciation for the challenges that each one of you is going to have,” he told students at the event co-sponsored by the Robert Day School Economics and Finance, the Kravis Leadership Institute and the Rose Institute for State and Local Government.

“For me it all goes back to two things that laid the foundation for whatever successes I’ve had in my life: my mother, her character and values that I received. But everything I’ve achieved in life started – literally – at this campus. It was the basis of all the different positions I’ve been able to hold, but even more importantly, the life perspectives that I learned.”

Currently, Leppert is Chief Executive Officer of Kaplan, Inc., a subsidiary of Graham Holdings Company and one of the world's largest education providers. From 2007 to 2011, he served as mayor of Dallas, Texas and previously worked as CEO of the Turner Corporation.

For Leppert, CMC is a special place due in no small measure to the roundabout way he enrolled at the College as an undergraduate.

“I had been getting schooling at a community college after going to a really undistinguished high school where every one of the 4,000 students enrolled lived no more than about 10 miles from the school,” he said. “Someone told me about a small college in Southern California. I bummed a ride out here.

“I was supposed to have no more than a 15-minute conversation with the Dean of Admissions, Emery Walker, at CMC and it turned into three hours,” Leppert continued. “At the end of those three hours he told me to come back at the next month without a transcript, application or test scores.”

Leppert told the story, he said, for two reasons. “Number one, there are going to be times in your life when your path will be very different from what you expect. It’s exciting and a lot of opportunities come out of it. The second part is that one person can make a difference. A guy by the name of Emery Walker made that difference in my life.”

In a career of leading by example, Leppert had definite ideas about what kind of people he wanted around him in any endeavor be it public or private.

Leppert ended his talk with a quote by Winston Churchill which underscored his core message and added a nice symmetry to the afternoon: “You make a living by what you get; you make a life by what you give.”