At its most basic, origami involves folding a single piece of paper into an intricate shape. Cutting is not allowed. Adhesives are prohibited. From the mid 20th Century on, much attention has been paid to the mathematics of the pursuit.

“All the current masters of origami are primarily mathematicians and physicists, not artists,” Beall said in an interview. “But I think that’s only one tool in a tool belt. I don’t think it’s the whole picture. ...Origami shouldn’t be hijacked so you don’t have room for artistic or freeform expression.”

If there’s a word that defines Beall’s pursuit of origami, it would have to be “freeform.” At the heart of neo origami is Beall’s belief that anything can be folded, that folds in nature are just as much a part of origami as the most precisely folded paper crane or star or praying mantis.

“I draw a lot of metaphors with how folds are made,” Beall said. “In the desert, in Death Valley, there are these gorgeous sand dunes. There are intricate lines and folds made by the wind. One could reasonably expect it’s possible to take fans and recreate it on a bed of sand.” 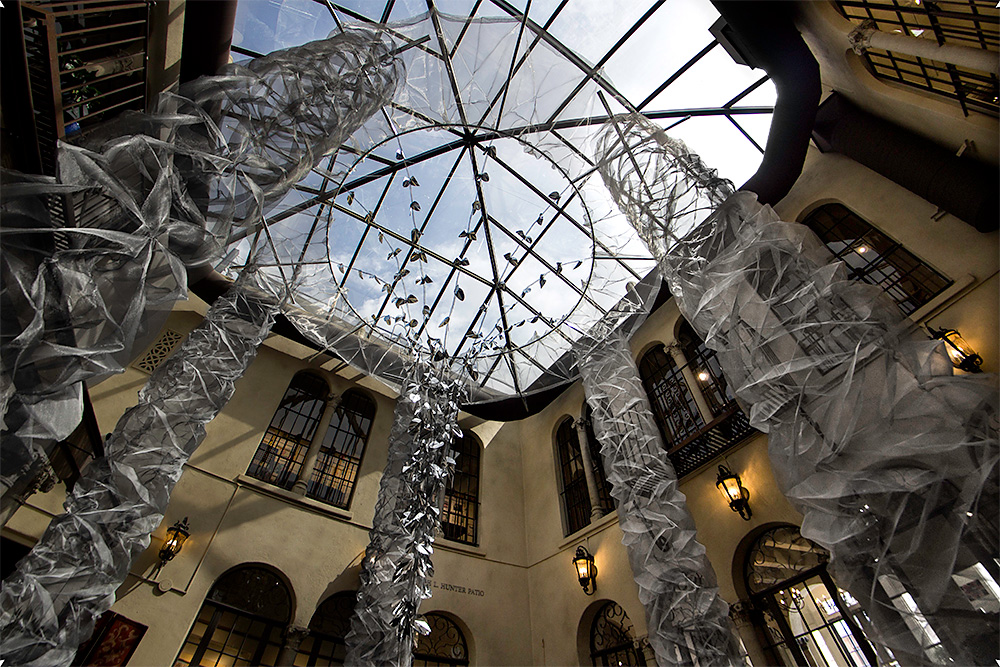 “Temple of Neptune” at the Riverside Museum of Art.

Beall features a massive work called “Temple of Neptune” in “Neo Origami.”  The erstwhile chemistry student created the installation during a stint as artist in residence at the Riverside Museum of Art last spring.

The piece, which was inspired by architect Julia Morgan’s Neptune Pool at Hearst Castle, was folded by hand using 1,500 square feet of woven aluminum mesh. Suspended in an inner courtyard, it floats down for 22 feet, a kind of ethereal mobile with five gossamer pillars surrounding a sprig of silver mylar leaves.

Beall said he parted from traditional origami out of a sense of “duty.”

“I have to see it be the best that it can be,” he said. “Origami isn’t able to speak for itself, fight for what it believes in, and no one is speaking out for the potential it has. I have a duty because of how much I love it and how beautiful it is.”

The main tenet of neo origami, Beall said, is simple: “Anything that’s folded can be considered origami. A fold is a transformation or warping of a plane. Any other rules and paradigms restricting it otherwise should be broken, should be pushed further. In my book, I have digitally folded structures.”

Beall knows a thing or two about breaking free of normal restrictions. He changed his major 10 times, exploring nearly every pursuit Claremont McKenna College offers, an academic investigation he says informs his art.

“After that, I did math,” he continued. “Then I did industrial engineering. Then after that was philosophy, then economics, computer science, and history.”

Chemistry and science are a big part of his art career, Beall said, because he creates many of the materials he uses in his artwork. His humanities coursework — particularly a class that focused on Greek tragedies and epic writing — has also shaped his work.

“The fact that Claremont McKenna College is so open to allowing you to change majors and allow you to do whatever you want, be as free as possible, while making sure you stay on track to graduate” has been a boon, said Beall, who is applying to law school.

“If I had gone to art school, I wouldn’t have been able to take all the chemistry and science classes,” he said. “If I was going to do it over again, would I go somewhere else? Absolutely not. The 5Cs consortium was a really great thing.”