Literature's mystery and ambiguity: A talk with Mary Gaitskill

SIGN MY BOOK? Athenaeum Fellow Ben Tillotson '15 with novelist Mary Gaitskill after her evening reading at the Athenaeum this spring.

Novelist Mary Gaitskill leans back in her chair.

"I thought it would be grim," says Gaitskill, who's finishing up a semester as a visiting professor in the Department of Literature and visiting lecturer under the auspices of CMC’s Family of Benjamin Z. Gould Center for Humanistic Studies.

She's referring to her initial reaction to the invitation to take a spring teaching post.

But it wasn't this invitation (or CMC) that made the critically acclaimed novelist feel grim about coming to Southern California.

Instead, she says she was thinking about other qualities of Los Angeles life. Congested freeways. Disconnection. Frustrated access to L.A.’s cultural life, which is a traffic-filled 32-mile drive away.

“I thought I’d be trapped, and then it dawned on me,” she says, smiling, “it’s so beautiful here. It’s hard to be in a bad mood. People in New York look pretty grim these days. They seem so beaten down. But not here.”

This physical atmosphere, along with Claremont’s cultural one, have provided Gaitskill with an ideal environment to work on a novel-in-progress and give students a chance to work closely with one of the very best contemporary fiction practitioners around.

Gaitskill has offered two courses—one in creative writing and a survey course “The Art of the Short Story”—open to students from all of the Claremont Colleges.

(She also gave a reading from her manuscript-in-progress earlier this semester and fielded audience questions during an evening lecture at the Marian Miner Cook Athenaeum. See photo, below.) 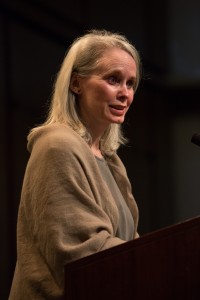 Enrollment has been very good, and surprising, she says—few English majors, but plenty majoring in math, biology, psychology, organizational studies, philosophy, and dance.

If those majors are any indication, books and literature probably haven’t been very high on their  priority lists. Gaitskill discovered this early.

“I asked them about the books that they’d already read, and they’ve read so little,” she says. “They didn’t know writers that I expected them to know by now.”

But that has turned Gaitskill’s courses this semester into a golden opportunity. Undergrads enrolled in the courses have been guided through the work of world literature’s greatest figures—Chekhov and Kafka among them—by a writer whose own work, Kathryn Harrison says in The New York Times, is a “fierce artistry” introducing “the sublime into the sordid.”

That collection also includes the story “Secretary,” which was made into a 2002 movie starring Maggie Gyllenhaal—and, as Hollywood has done many times before, shuns the source-story’s mystery and ambiguity in favor of a far more digestible happy ending.

Ambiguity and mystery—these two qualities are what Gaitskill has wanted her students to recognize in the central texts of her two courses at CMC. Take, for instance, Kafka’s “The Metamorphosis.”

“It’s about mystery—about the inexplicable person in the midst of a family,” she says. “Many families have a member who's like that, who's different. Maybe they’re ill, physically or mentally. It’s what makes them different, what can turn them into monsters in other people's eyes.”

And the ability to interpret a story in this way, she adds, requires a careful way of seeing that is rarely cultivated anymore.

“In the course of daily life, that’s just not where we go,” she explains. “I’m hoping that I’ll be able to open up a faculty in them that hasn’t been stimulated very much before, a kind of perception that’s slower, deeper than they’re used to and that they’ll recognize.”

In her creative writing class, Gaitskill has spent many hours reading drafts of student fiction, and she says that in some cases she finds a real struggle going on. (That, in case you didn't realize, is a good thing.)

“They’re trying to get at something that’s real, even though they don’t have the language yet,” she says. “It’s been wonderful for me to have students with this capacity and to have a chance to nurture them.”

OTHER NEWS FROM THE GOULD CENTER