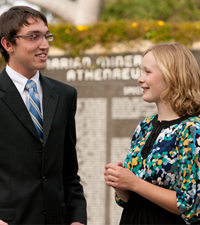 When it comes to dreaming up names for future Athenaeum speakers, Pyper Scharer '13 and Jeremy Merrill '12 have already given it some thought. Among others, Scharer would love to sit down and share a meal and conversation with Sarah Palin, while Merrill would be interested in hearing from educator Noam Chomsky, known for his revolutionary linguistics work and outspoken political stances. "His far-left politics," Merrill says, "would also spark a very interesting debate on campus since his views are held by fewif anyCMC students."
As the newly selected Fellows for the Marian Miner Cook Athenaeum, the
CMCers will split duties this next academic year hosting various lunchtime and evening Athenaeum programs, introducing guest speakers, managing questions from student audiences, and assisting in organizing a list of guest speakers for the year. In addition, they will contribute announcements publicizing lectures and speakers for the Athenaeum's bi-weekly newsletter, The Fortnightly.
"I look forward to learning about any and all topics from our speakers and the ensuing discourse," says Merrill, "and to improving my networking skills and learning from the speakers' incredible ranges of personal experience."
Scharer says that as an Ath Fellow, she hopes to learn about unfamiliar parts of the world and different fields of study. "Bringing speakers who are especially knowledgeable and engaging is most important," she says, "because it is easiest to learn from people with passion."
An international relations major from Seattle, Scharer is scheduled to teach math to elementary students in India this summer. At CMC, she's become involved with the Center for Human Rights Leadership, and is considering either the Human Rights Sequence or the Leadership Sequence as a supplement to her major.
"The Athenaeum is my favorite thing at CMC," she shares. "For me, it serves as a tangible, constant reminder of the amazing opportunities we have here."
Merrill is a philosophy and linguistics major and hails from Durham, North Carolina. He participates on CMC's Mock Trial team, writes for the Claremont Port Side and is co-founder of Claremont Currents, a news media aggregation site meant to unify Claremont's diverse and fractured media scene.
"As an attendee of previous Athenaeum events, I've enjoyed the deep variety of talks on different topics, particularly political talks from speakers such as Lt. Dan Choi and Stephen Bullock," says Merrill. "Now, in a leadership position at the Ath this fall, I'm really looking forward to making a difference."
For Scharer, an ideal speaker slate for the Ath would begin with a series that honors the fifth anniversary of Hurricane Katrina.
"I am involved in a Seattle-based nonprofit group, Shirts Across America, that supports the St. Bernard Project, an organization based outside of New Orleans which is working on rebuilding homes in St. Bernard Parish," she says. "For a (possible) Remembering Katrina series, I would hope to bring five speakers (in reference to the five years that have passed) to help raise awareness about Katrina and the devastation that still remains in the Gulf Coast region."
Ideally, she says those speakers would be: Liz McCartney (co-founder of the St. Bernard Project), Chris Rose (an author/journalist from New Orleans), Sam Perkins (member of the New Orleans Hornets), Laura Snowden (co-founder of Shirts Across America), and Pastor Pat Wright (gospel singer involved in activism on behalf of Katrina relief).
"I've got quite a list of my own ideas and of suggestions," Merrill adds. "A sampling would include liberal blogger Glenn Greenwald, linguist and vociferous Strunk and White hater Geoffrey Pullum, and futurist and father of the Internet' Vint Cerf."
According to Merrill, the essence of a liberal arts education is getting a very broad intellectual foundation on which to base your life.
"The Ath provides the opportunity for CMC students to leave their everyday academic environment (which is often centered on their major) and enter one where the focus is on diverse and interesting other topics," he says.
"Being an Ath Fellow will provide me with the opportunity to meet and learn from extremely interesting, intelligent, and worldly people," Scharer notes. "As a CMC student, I have come to realize that there is only so much we can learn in classrooms, and that we must seek knowledge through more practical means if we want to reach our fullest potential. The Athenaeum is a perfect venue for this type of learning."
"As you can see, I must have one of the most interesting jobs on campus," says Athenaeum director Bonnie Snortum. "Having just completed a year with two extraordinarily gifted fellows, Paige Costello and David Nahmias, I eagerly look forward to working with Pyper and Jeremy.
"Intellectual curiosity and openness to new ideas are just two of the many reasons why they are are ideally suited for this position," Snortum adds. "Rest assured the Athenaeum will continue to recognize the diversity of viewpoints and interests represented at CMC."
Conceived as a place where students and faculty could gather for intellectual discourse in an intimate and relaxed setting, Athenaeum events are primarily for students. During the year (Monday through Thursday) the Athenaeum hosts lunches, dinners, and receptions for academic classes, student organizations, and official functions of the College.