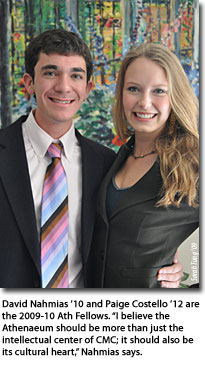 Sure they take a great picture, but here's why David Nahmias '10 and Paige Costello '12 were selected to be Athenaeum Fellows for the 2009-10 academic year: They're intellectually curious, good communicators, creative thinkers, have strong academic records, and understand that they are the public face of CMC when meeting and introducing to the larger community the many distinguished guests who visit campus Monday through Thursday.
Those are qualities, says Marian Miner Cook Athenaeum Director Bonnie Snortum, that help distinguish serious Ath Fellow candidates from others who may simply want the job because of its "high visibility." But even if an applicant looks good on paper, the real test comes with the personal interview, which is a significant part of the selection process, Snortum says. That's when students not only offer their interpretations of the job, but also reveal their public speaking skills and ability to "think on their feet."
Costello, who has yet to declare a major, says she's interested in literature, economics, government, and Spanish. Born in Colorado, she moved every two years until age 10, "at which point we relocated within the state of Arizona." Home, she says, is in the small, southern town of Patagonia.
Nahmias, a dual major in international relations and Spanish, also calls Arizona (Phoenix) his home. He spent last fall studying abroad in Buenos Aires, Argentina.
On a recent afternoon, we tossed several questions at the new Ath Fellows, and thought we'd let them speak for themselves. What do you want to learn from your experience as an Ath Fellow? Nahmias: I hope to say that during my tenure, I brought a wide range of perspectives on political and social issues for the entire CMC community. I intend to reach out to distinct sectors of the student body and ensure that the Athenaeum remains the intellectual and cultural core of the CMC experience. Costello: I wish to gain more experience as a public speaker and to expand my interests and the interests of others. Over the course of the year, I am sure David and I will acquire greater understanding of previously foreign areas. It will be a horizon broadening experience. What class did you most look forward to this past year, and why? Nahmias: I have particularly enjoyed Professor Roderic Camp's Mexican Government and Politics course, and Professor Bill Ascher's Policymaking in International Organizations. Both were intellectually engaging and continued to stimulate my interest in international affairs. Costello: I can tell you what class I'm looking forward to next semester: a drawing class at Pitzer, taught by visiting professor Max King Cap. I hope to experiment with different styles and perspectives and to add a creative twist to my economics, government, mathematics, and Spanish routine. Is there a particular book you think everyone should read? Nahmias: I really enjoyed reading recently And the Band Played On by Randy Shilts. It is an exhaustive investigation of the AIDS crisis in the United States from about 1978 to 1986. Shilts exposes the incompetence, selfishness, ignorance, and outright bigotry of almost every group or agency involved, ranging from the public health scientists to politicians to interest group representatives. Costello: The Alchemist, by Paulo Coelho. It's a simple but wise fable about a shepherd boy's quest of self-discovery and his adventures as he travels from Spain to Morocco. It is told in a circular style with a timeless message of the importance of dreams and inner-fulfillment. How did you each discover CMC? Nahmias: I visited Claremont McKenna during a college tour in my junior year of high school. During my visit, I was captivated by the Athenaeum, and the opportunity to participate at the Ath was one of the foremost reasons why I applied early decision to CMC. Costello: I was interning with Arizona Congresswoman Gabrielle Giffords and she recommended Scripps College, her alma mater. When I explored the 5Cs, I found CMC to be a better fit. Do either of you have a dream Athenaeum guest? Nahmias: I have always harbored a secret desire to see Diane Rehm, the NPR commentator, speak at the Ath! Costello: Frank Gehry