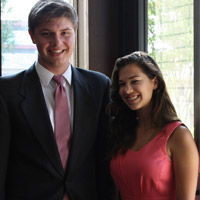 David Leathers '15 and Meredith Reisfield '13, newly named Ath Fellows for the Marian Miner Cook Athenaeum, are largely keeping mum about the slate of upcoming speakers booked for the 2012-13 Ath season the better to build some suspense. However, what they will say is that the talking heads thus far will be "intriguing."

Freshman Leathers (a possible Philosophy, Politics and Economics major) and Reisfield (an Environment, Economics and Politics and Spanish dual major) consider the Ath to represent everything that is best about CMC in microcosm: a curious and passionate student body, intense discourse, and engaged professors all under one roof, and in one evening.

What the future foretells for these two CMCers, even they can't pinpoint right now; graduate school looms large for both, and with a joint MBA and master's of environmental science, possibly, for Reisfield.

We caught up with the two movers and shakers ... and bookers, to ask a few Ath-centric questions: