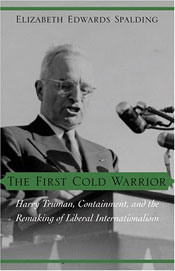 In her new book, Elizabeth E. Spalding, assistant professor of government and director of CMC's Washington Program, examines the presidency of Harry S. Truman and his leadership through the earliest days of the Cold War chill that permeated U.S.-Soviet relations for decades.
"Truman is essential to understanding U.S. strategy during the Cold Warthe global conflict that dominated much of the 20th century," Spalding says. "His unique vision, which was shaped by his dedicated anticommunism and his religious faith, informed all of our foreign policy. And I would argue that Truman's approach has relevance to thinking about the global conflict we find ourselves in since September 11." The First Cold Warrior: Harry Truman, Containment, and the Remaking of Liberal Internationalism, explores the meaning and ramifications of the two major initiatives led by the 33rd presidentincluding The Truman Doctrine, the Marshall Plan, and NATOdesigned to counter the tide of Communism that threatened and impoverished a vulnerable Europe after World War II.
"For anyone interested in better understanding the postwar world, as well as the post-9/11 world," says Pulitzer-prize winning author Anne Applebaum, "The First Cold Warrior is essential reading."
"Spalding makes a significant contribution to the intellectual history of American foreign policy and the contemporary policy debate," adds Robert G. Kaufman, author of Henry M. Jackson: A Life in Politics, and she "conveys beautifully the nuances of the spectrum of views about American foreign policy that so many commentators miss."
During the course of her research, Spalding realized that to understand how and why the Cold War ended, a new emphasis must be given to the early Cold War period. "The academic debate about the East-West conflict was gridlocked in its various factions, and Truman was faulted by all of the schools of thought in history and political science," Spalding says. "This led me to focus on Truman, precisely because he was president at the dawn of the Cold War and was subject to so much criticism."
Spalding cites the voluminous research material at the Truman library and the archives from the former Soviet Union (and its former satellites)now open to scholars and the publicas a prime reason for the reassessment of Truman and his approach to containment.
"Contrary to many scholars," Spalding says, "I came to the conclusion from my research that Truman, rather than the wise men' around him, was the key player in articulating and directing the strategy of containmentand in the form that was largely accepted by both political parties and nearly every president who served after him."