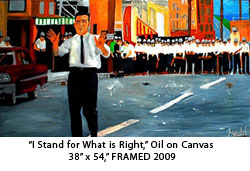 In a unique collaboration between art and politics, the Marian Miner Cook Athenaeum will host the official opening of The Search for Subatomic Realism on Wednesday, Sept. 30, an exhibit that features the work of artist Frederick Doar P'12. The public portion of the program begins at 6:45 p.m., with free seating on a first-come basis, and will include remarks by Frederick Doar as well as special guest John Doar, a civil rights attorney and activist who inspired the only non-abstract painting in the younger Doar's exhibit.

"I Stand for What is Right," which is among the paintings now on exhibit at the Ath, portrays the scene of John Doar, Frederick's uncle, defusing a potential riot in Jackson, Miss., after the assassination and funeral of the NAACP's Medgar Evers in 1963. Painted from the perspective of the marcher, the image shows John Doar with his hands up in mediation, indemnifying the crowd by saying, "I stand for what is right."
As part of the evening event, a 20-minute movie called, John Doar, Trailblazer for Justice, will be shown for perspective on the Civil Rights movement as well as John Doar's role during that time.

John Doar served as the assistant attorney general, Civil Rights division, for the U.S. Department of Justice from 1960 to 1967, and as Special Counsel to the House of Representatives with respect to the impeachment of President Nixon. During that time, he helped enable African-American student James Meredith attend the then-segregated University of Mississippi. Mr. Doar also prosecuted the individuals who allegedly lynched three civil rights workers in the Mississippi Burning case and helped draft the Civil Rights Act of 1965.

As a fulltime artist practicing in Sausalito, Calif., Frederick Doar works mostly within gestural expressionism. His abstract, vibrant, and active works seek to explore themes such as the collective unconscious and the landscape of a distant planet.

The exhibit runs through January 2010 in the Athenaeum's Security Pacific Dining Room.