Prof. Roderic Camp explains everything you need to know about Mexico with new book and interview series

How much does the average American actually know about Mexico, our neighbor to the south? Beyond geography, how entwined are Mexico and the U.S., policy-wise? To answer, do you first need to understand Mexico’s political environment? The questions might sound daunting, but a new book by Roderic Camp, Philip M. McKenna Professor of the Pacific Rim at CMC, answers them fully.

The forthcoming title is a new edition of Professor Camp’s seminal work, Mexico: What Everyone Needs to Know, which was originally published in 2011. Camp is considered one of the preeminent scholars of modern Mexican politics, and he utilizes his expertise to deconstruct relevant issues facing the country today. 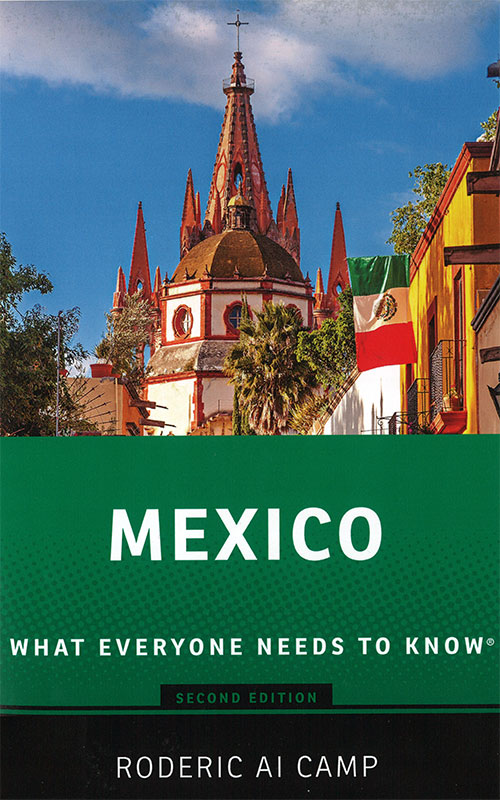 The updated edition wastes no time in addressing questions about Mexico, like security and violence, that are often part of the current national conversation here in the U.S. “President Trump’s [2016 presidential] campaign raised a number of issues,” Camp says, “about the wall and about NAFTA.” He believes that some Americans would benefit from a clearer understanding of these policies, “as might the new administration.”

Camp offers a comprehensive analysis of Mexico’s current state of affairs, history, and political future, but he made a note to write something that is accessible for a likely audience outside of academia. Deceptively simple questions, like “How are Mexico’s security problems America’s problems,” suggest complex and unwieldy answers, yet Camp’s deep knowledge lends to the pragmatic nature of his responses. To many readers, including students at the United States National Defense University, the book’s appeal lies in this Question & Answer format.

What better way to critically understand a topic than asking a series of questions? This was Oxford University Press’ approach when they invited him to write a book for their What Everyone Needs to Know series, which “offers a balanced and authoritative primer on complex current event issues and countries.” The questions, in part, were informed by those often raised in the media or, as he says, repeatedly asked in “my public speaking engagements among general audiences and students.”

While the 2017 edition of the book still exists as part of the book series, it fits more accurately into a larger ecosystem of the Oxford Research Encyclopedia (ORE) on Latin American History. The project is helmed by William Beezley, professor of history at University of Arizona, and leading scholar of Mexican history.

The ORE of Latin American History offers a tapestry of information broken down by region, country, and critical historical avenues (think Environmental History, Indigenous History, Military History, et al). While this breadth of scholarship is typical to the ORE model, editor-in-chief Beezley is taking his research area a step further with an intuitive digital component. Oxford University Press considers Beezley’s Latin American History to be their most ambitious and innovative project of the last two decades.

Camp’s book is the first in the ORE Latin American History series to include hyperlinks that bring the reader to supplementary digital videos. Camp and Beezley conducted a series of professionally filmed interviews with distinguished Mexicans who played a role in shaping Mexico’s political climate from 1988 to the present, including former president Felipe Calderón and opposition leader Cuauhtémoc Cárdenas. The videos, Camp says, offer a rich perspective on Mexico’s current political climate. The Oxford University Press will keep the videos available for download for the foreseeing future.

While Professor Camp had previously contributed to ORE, Beezley found that Camp’s book, the culmination of a “nearly fifty years of fascination and inquiry about Mexico,” would play an ideal role in covering Mexico’s political history for this new project. “Above all,” Beezley says, “Rod has directly or indirectly talked to Mexicans from all walks of life. He has recorded, pondered, and written about what they have told him. Famously he provided the first and most sophisticated analysis of Mexican elites in any language.”