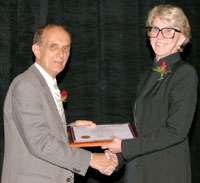 Janet Myhre, the Dengler-Dykema Professor of Mathematics and Mathemtical Economics, and founding director of CMC's Reed Institute for Decision Science, has been named a 2004 Fellow of the American Statistical Association (ASA). Long recognized in the academic, public, and private sectors for her pioneering work in the area of statistics, Myhre is being honored by the ASA for 35 years of significant theoretical and applied research, outstanding interdisciplinary problem solving, innovative teaching, and utilization of the synergistic relationships among them.
"Much of mathematics is deductive reasoningcoming to a conclusion," she says. "But more than that, statistics performs inductive reasoning: we project, do risk analysis, infer from data. Statistics is an addition to ordinary mathematics."
Each year, the ASA can elect only one-third of 1 percent of the organization's active membership. Myhre was selected based on her established reputation, as well as her numerous contributions to the statistical field.
Among Professor Myhre's many accomplishments: she served for six years as an associate editor of Technometrics, the ASA's journal for the physical sciences; is current president of the Southern California Chapter of the ASA; has held the position of statistical consultant to the U.S. Navy's Strategic Systems Programs since 1972; has ridden shotgun with Navy pilots; and has gone to sea in nuclear submarinesin addition to her 29-year role as director of the College's Reed Institute.
The Reed Institute for Decision Science has compiled an impressive record of projects since its beginning in 1975. With an objective to teach students how to apply statistical and mathematical techniques to solve problems facing private firms and government agencies, Myhre has enlisted problems from numerous outside organizations, including the Environmental Protection Agency, Lockheed Martin Corporation, and the U.S. Navy. The problems give mathematics and economics students valuable, practical training in statistical modeling.
"We provide students with real data and real problems; students are guided in how to solve these problems and sometimes they develop new theories themselves." she says. "Early in the Institute's history, the U.S. Congress's Drell Commission was studying nuclear safety. CMC students helped develop new theories for use in this study. The work we do at the Reed Institute gives students a great sense of accomplishment."
Not all of the Reed Institute's assignments are high-government work. The Institute has worked on problems from law firms, the California Lottery, Millers Outpost and Prudential Real Estate. Recently students worked on a problem to predict the salinity of the Salton Sea.
A large part of Professor Myhre's commitment to CMC rests in teaching students the importance of analyzing data and understanding what the students are able to with their statistical findings. "In the 21st century, statistics and data analysis will become increasingly important areas of study and application," she says. "I think every student at CMC should take a course in data analysis and learn how to think through the data. We've been able to elevate the study of statistics into not just plugging numbers onto software packages. CMC students see what a powerful discipline statistics is in all of its aspects. What excites me about the field of statistics is that its study allows one to solve real problems of current interest whose solution makes a difference in society."
Generally, recipients of an ASA Fellow award are research professors at graduate universities or statisticians working for large private or public research facilities. CMC is one of the few undergraduate colleges where a professor has received the prestigious award.