Students visit marvels of the ancient world in Los Angeles

“Students joining the trip represent a cross-section from the five Claremont Colleges, each of whom is currently enrolled in courses that contribute to the History and Classical Studies programs at CMC,” said Bjornlie, who is a former Fellow of Ancient Studies at the American Academy in Rome. 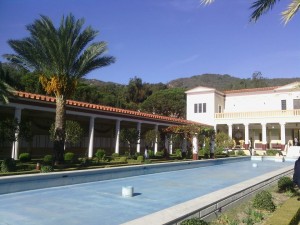 Bjornlie has organized student trips to the Getty Villa almost every year since 2007 and this year did so with help from the Mellon Grant for the Humanities and History administered by the Dean of Faculty Office.

The Getty Villa, with an endowment of more than $660 million from entrepreneur J. Paul Getty, remains the single most lavishly funded museum in the world and serves to house precious antiquities of Greek, Roman, Etruscan and Near Eastern origin. The Getty Villa offers an unrivaled opportunity for students interested in the classical heritage to experience the marvels of the ancient world in Los Angeles.

“The material culture of the ancient world complements, and in important ways qualifies, what we learn from the rich textual heritage of the ancient world,” said Bjornlie who hopes that exposure to this once-lived visual culture will inspire students to investigate the intricate narratives of the past with a deeper appreciation for the creativity, aesthetics and cultural exchange that made the ancient world so vibrant and so worthy of admiration.