The moment when LBJ's life changed 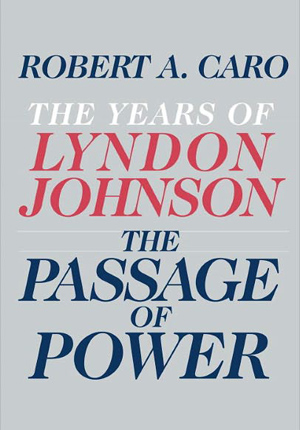 Though a large crowd attended last Thursday’s lecture by prize-winning presidential biographer Robert Caro, you could have heard the proverbial pin drop in the hushed silence of the Athenaeum’s main room.

Audience members hung on every word, as Caro recounted stories of JFK’s assassination and Lyndon Johnson’s assumption of the presidency from The Passage of Power, the latest volume in his massive, multi-volume historical biography, “The Years of Lyndon Johnson.”

Like a visit earlier this month by celebrated poet Sharon Olds, Caro’s presentation to an audience of students, faculty, staff and community members was sponsored by the Family of Benjamin Z. Gould Center for Humanistic Studies.

Caro’s visit provided the CMC community with an exceptional opportunity to listen to a preeminent biographer describe his methods and insights into great historical figures and historic moments that we all assumed we already understood.

“Johnson was a genius in the use of political power,” Caro said, “and the greatest vote counter in Congress.”

The biographer described his experience of reading tally lists that Johnson kept for every vote and finding that the writing was smudged and hard to read – smudged by Johnson’s thumb repeatedly sliding down the lists as he tracked votes in favor and against.

And yet, despite his legislative mastery and its value to them, the Kennedys derided him.

“They called him ‘Rufus Cornpone,’  ” Caro said, drawing an amused chuckle from the audience. And when the Kennedys described Johnson and Lady Bird, he added, they called them “Uncle Cornpone and his little porkchop.”

The marginalizing of Johnson ended in Dallas in 1963. Caro gave an extraordinary narrative of those heartbreaking moments when the nation learned that JFK had been shot. Johnson stood off to the side, waiting, like everyone, for news of JFK’s condition.

When someone approached and addressed Johson for the first time as “Mr. President,” Caro said, “an instant change came over him. It was a moment of transformation” in which his new role suddenly became clear.

Soon, Johnson was plunging into his domestic vision of the Great Society and, as Caro explained during a question-and-answer session at the end, the fifth and final installment of his series will examine how “all of Johnson’s hopes for the Great Society were submerged by Vietnam.”

That, in fact, is a mystery that still puzzles him about Johnson.

LBJ, Caro insists, knew that military involvement in Vietnam would destroy all of his domestic hopes and plans. One sees Johnson’s realization of the danger in memos from secret meetings about the war, which Caro has read.

“He can see it coming. He knows what’s going to happen if he escalates the war. It seems so clear that they’re going to de-escalate, and then they don’t,” Caro remarked, shaking his head. “They go ahead with it anyways.  Understanding why they did that is something about Johnson that I just haven’t figured out yet.”

SAVE THE DATE: The next Gould event at the Athenaeum will be a reading by poet Naomi Shihab Nye, February 28, 6:45 p.m. , in the Security Pacific Dining Room