The Shakespeare Clinic: Students to Report on Latest Findings In Continuing Authorship Question 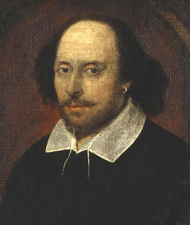 Few names in literature are as massive as Shakespeare's. "He is probably the most colossal figure in all of history," considers professor Ward Elliott, who has coached students through years of computer research on Shakespeare's authorship, as well as the lengthy list of Shakespeare canon claimants. As if he needed proof of Shakespeare's historical relevance, Elliott mentions Charles Murray's book, Human Accomplishment: The Pursuit of Excellence in the Arts and Sciences, 800 B.C. to 1950, whichby citation analysisshows Shakespeare towering above such names as Newton, Plato, Aristotle and Descartes.
Yet, despite his mighty perch over literature past and present, "nobody is sure who Shakespeare was," Elliott has said. "Many people doubt that a Stratford man had the horsepower to be Shakespeare. And the other question has been: What did he write?"
At 7:30 p.m. on Thursday, April 22, Elliott's students, working together as The Claremont Shakespeare Clinic, will report their latest findings. The event, to be held in Bauer Forum, will showcase recent work by Jeremy Merrill '12, Heather Siegel '12, and Tova Markowitz '12, who were asked by Elliott to test sections of four plays recently ascribed in part to Shakespeare.
In order to do this, the trio relied on techniques developed by previous Claremont Colleges students who were part of the original Shakespeare Clinics that Elliott and math professor Rob Valenza organized and advised between 1987 and 1994. At the time, those students were asked by the Shakespeare Authorship Roundtable to use their computer skills to shorten the list of arguable Shakespeare claimants and plausibly Shakespeare-ascribable plays of the Shakespeare Apocryphafrom about 24 or more of each, to a more manageable number.
(If you consider yourself a Shakespeare Authorship buff, you may want to take a crack at the quick trivia quiz that Elliott et al. has come up with: Trivia Quiz.)
In four years of testing, students in the original Clinics shortened both lists of claimants to zero. No claimant matched Shakespeare in style, nor did any play of the Shakespeare Apocrypha, Elliott says, and no one has successfully challenged their new-optics findings, which were reaffirmed April 6 with the publication of James Shapiro's Contested Will: Who Wrote Shakespeare? The first and best book by a lit-department professor on the Authorship Question in more than a century, Contested Will, says Elliott, used old-optics analysis first to narrow the principal claimants to Francis Bacon and the Earl of Oxford, then to show that Shakespeare was a far more credible candidate than either of these.
This year's Clinic, again sponsored by the Shakespeare Authorship Roundtable, tested 27 early playsor parts of playsof uncertain authorship, which are probably not by Shakespeare but by someone else, Elliott explains. Who else could have written them? Or, better, Which of the 16 other known authors of the early 1590s could not have written them? The students' assignment, again, was to shorten the list of credible claimants to have written the unassigned plays and sections.
Their presentation on Thursday will be a progress report on an ongoing project, subject to further validation, says Clinic captain Jeremy Merrill. The present evidence, using off-the-shelf tests from earlier Clinics on newly interesting texts, implies that two of the most recent Shakespeare ascriptionsthe revisions to Mucedorus and The Spanish Tragedyare improbable Shakespeare ascriptions, and that Thomas of Woodstock, recently touted as "indisputably Shakespeare," seems to be on a different statistical planet from Shakespeare.
By the same token, Shakespeare's hand in the first half of Double Falsehood and four scenes from Arden of Faversham has not been ruled out, Elliott notes.
Will the students, he says, at last confirm the old suspicion, argued in Brean Hammond's forthcoming Double Falsehood, that Double Falsehood is a reworked version of Shakespeare's [and John Fletcher's] long-lost Cardenio? The students will describe what further tests may help answer the question, Elliott says.
Thursday's event is open to the CMC community.
For more information about the works of the Shakespeare Clinic, visit: http://www.cmc.edu/pages/faculty/welliott/shakes.htm.