Ever since her undergraduate years at CMC as a Government major, Jennifer Waggoner ’95 has been interested in creating positive social outcomes across a variety of sectors, ranging from the non-profit to the for-profit. 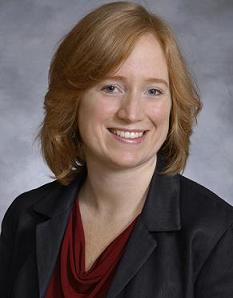 For her longtime efforts, especially in her role as president of the League of Women Voters of California, Waggoner was the first recipient of the new Pamela Gann Leadership Award, which was awarded earlier this month at a luncheon held during CMC’s presidential inauguration weekend.

Established by the CMC Alumni Association to honor Gann’s tenure as the College’s president, the award will be given annually to acknowledge the significant leadership of notable trailblazing alumni, as exhibited by their impact and influence in the advancement of community-building, volunteerism, or social entrepreneurship.

Waggoner received the award from co-presenters Gann and CMCAA Past President Carol (Oliver) Hartman ’86, who also noted Waggoner’s commitment and service to the College in the years since her graduation.

Last year, in fact, Waggoner addressed an audience at the Marian Miner Cook Athenaeum on the topic of female leadership and the “leaderette” gender bias that female execs invariably encounter. She exhorted her audience to embrace a gender neutral concept of leadership in that address, titled “Nobody Wants to be a Leaderette.” To view a video of that speech, visit this link:

As the head of a renowned grassroots education and advocacy organization in California, Waggoner also has been honored by California Forward, a bipartisan organization aimed at improving state government performance, as one of its “Forward Thinkers.” She went on from CMC to receive her Diploma (Social Policy ’98) from the University of Edinburgh, Scotland.