With the installation of Chris Burden’s Meet in the Middle sculpture to the annual Student Art Showcase to the visual pieces on display in the dorms, administrative buildings, and the Athenaeum, works of art can be found in spaces throughout campus.

The most recent addition to CMC’s art and creativity initiative is a piece called Digital Odyssey, which aspires to retell the 12-year journey of Odysseus (the titular Greek hero in Homer’s epic poem Odyssey) in a modern framework. The sculpture was on display at Roberts Pavilion, Dec. 6-16, and is the work of Lawrence Beall ’16, with funding assistance from the CMC Student Art Council and the Dean of Students Office.

Beall hopes that artwork like his Odyssey can be used to spread awareness on campus that CMC students, in his words, “actually do art!” Beall’s artwork represents the traditional concept of moving and wandering transformed by a digital world that has seeped into every physical space around us.

“Digital Odyssey is a manifestation of my own wanderings and homecoming,” Beall says. “After receiving my mastership of origami, I became disillusioned with the art form: None of my fellow masters in the art form are innovating, none are pursuing the art as an actual art form, but rather, a mathematical problem. Nearly all the masters of origami are mathematicians and physicists only concerned with the mathematical calculations to create representational forms.” 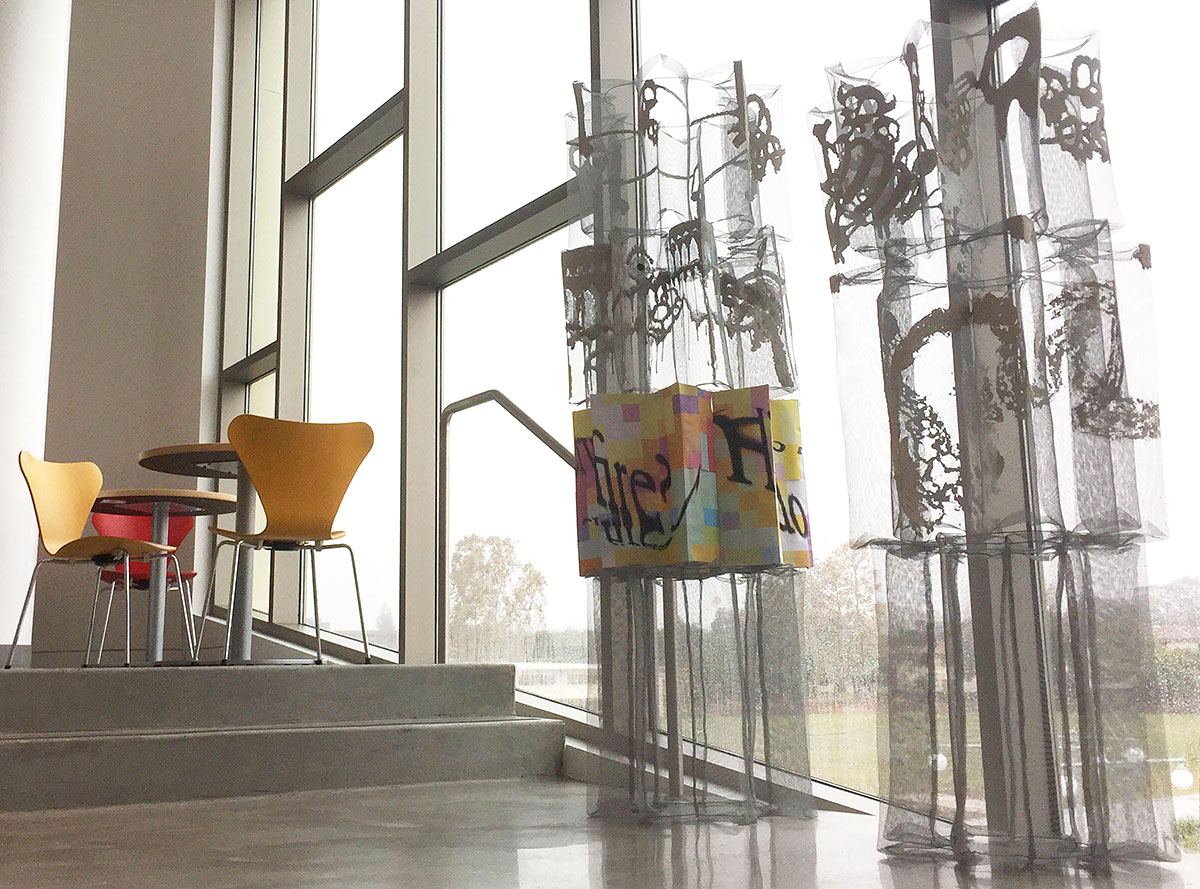 According to Beall, Digital Odyssey reinvents ancient Greek columns via a modern and manufactured material of aluminum wire mesh, folded using “neo-origami.” On several parts of the columns, unfired clay (a purely analog medium) “un-earths” the experience of interacting with analog environments that have been hybridized with the digital world and which are represented by the pixels of the mesh that contain the clay. A ring with the text “How do you walk through a sea of crystal fire” references the academic history of the transistor, titled “crystal fire” that details the birth of the Information Age as a result of that one piece of technology.

“It was only after taking ceramics at Scripps College, and allowing myself to get lost in something totally different and wander for a while, that my love of origami had been reignited and I found my way home again,” Beall says about the inspiration for Digital Odyssey. “I realized it was my duty to change the field of origami, just as my art professor Nicole Seisler has innovated in the field of ceramics. She has been an incredible inspiration to me, pushing me forward to think critically about my role as an artist and change maker.”

Beall has been a master of origami since 2014 and says that Odyssey represents a break from the tradition. “I’m starting my own art form to separate modern work in origami from the historical context,” he says, “so that the art form is free to move forward, and that by doing so, it doesn’t uproot the rich culture, history, and tradition of origami.”

A CMC literature course Beall took (Translation in Theory and Practice) taught by Professor Kathryn Stergiopoulos, was a direct inspiration for Digital Odyssey. “One of the things we did was read ancient Greek texts, such as the Odyssey, and many different translations and interpretations of the text to see it in many different ways,” Beall says. “I have been captivated by the Odyssey ever since: It is a story of the touching of different worlds, cultures interacting for the first time, and broader themes of wandering and homecoming.”

Beall says his art has a distinctly CMC flare because of the leadership aspects involved. “I am confronting this real world problem [innovating a new art form from traditional origami] and am not afraid to stand up for what I believe in, and take leadership,” he says. “I am blazing my own trail. It isn’t easy, but it is what I believe in and I am doing it.”

The idea to display Digital Odyssey in Roberts Pavilion has parallels with Beall’s personal odyssey that played out in the field of origami. “For a while, I was disillusioned with the cause of the arts at CMC, because we don’t have art classes offered here,” he says. “Gradually, the campus has been changing. This year, I had realized it had made huge leaps and bounds. I was able to request funding for an art project and received nothing but support and assistance from people at school. Both DOS and the Student Art Council and the director of Roberts Pavilion have graciously helped in these efforts. Displaying in Roberts is a bit of a homecoming for my artistic practice. I wanted to display something of mine at my college before I graduated, because it is my home. I just really needed to be able to do it.”

Beall hopes that CMCers will recognize that the College supports the arts in a way that it might not have done in the past. “This campus is changing and it’s changing in a really good way,” he says. “I think it’s also important that CMC students remember how art has a tremendous ability to make change. Being a leader can extend to the world of art, and one can make a huge impact by inspiring people through art. I think that it’s important to realize that making change in the world cannot happen just in quantitative fields. The humanities and the arts have the ability to connect to people’s hearts, which is where real change will happen. Even if you use logic to convince someone of something, without speaking to their heart or their humanity, it is impossible to lead others.”

In addition to his neo-origami art movement, Beall has been designing jewelry since he turned 15 and currently has a jewelry company called Laurent Belle that was featured in Teen Vogue. “The jewelry is also part of this neo-origami movement because it pushes the bounds of materiality for paper,” Beall says, “and through a chemical process I developed, it transforms the paper into durable, ‘paper gemstones’ as I call them.”

Along those lines, Beall recently invented a new metal alloy he calls Solaris Metal that changes colors -- red, pink, purple, brown, black, and others. “This new alloy could have many functional applications as well as its aesthetic applications,” he says. “I, myself, have limited use for this really incredible material, so I am looking to connect with people who would have a greater use for it. I will be patenting the material and eventually sell the patent.”

Beall will headline a major art exhibition at the end of April at the Riverside Art Museum and will be an artist in residence with the museum for the project, which also coincides with the museum’s 50th anniversary celebration.

“I am constructing a 20-plus-foot-tall installation there, and the piece will be called the Temple of Neptune,” Beall says. 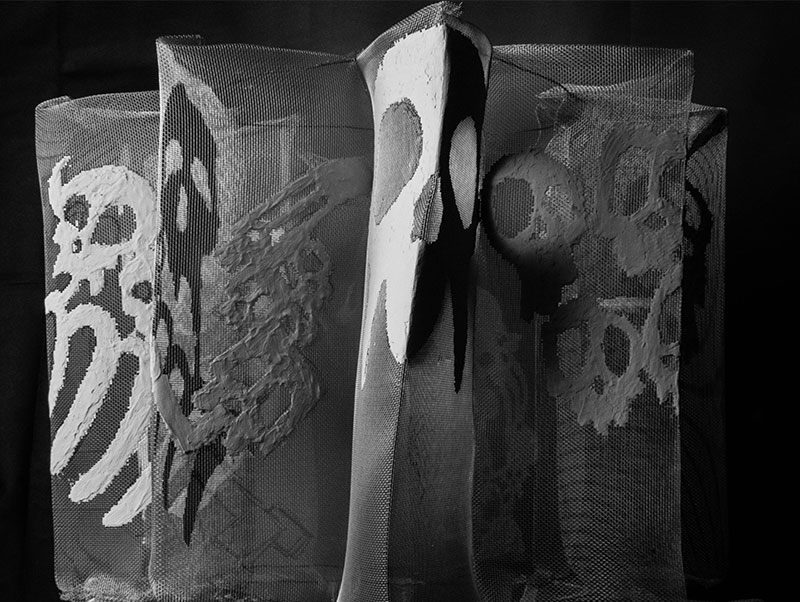