New faculty books: Chasing a tempest of an idea

Look up the word “sympathy” in the dictionary and what do you find?

Not a single definition, but a number of them, all pointing to the same general meaning: the feeling of compassion toward another being. 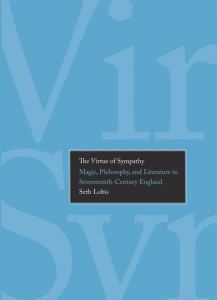 In his new book, The Virtue of Sympathy: Magic, Philosophy, and Literature in Seventeenth-Century England (Yale University Press), Associate Professor of Literature Seth Lobis uses some of literature’s mightiest writers to explore how a word once associated with magic and mysticism evolved into one associated with morality, and an empathetic component in human relationships.

“This is a book about seventeenth-century England and more specifically about the relationship between two major concepts of sympathy in the period, one universal and magical, the other interpersonal and moral,” writes Lobis, an expert in Renaissance literature.

Lobis says previous literary and intellectual historians have tended to “treat the two concepts in isolation, as if they belonged to entirely separate historical conditions… Standardly affiliated with ethics, sympathy, I want to argue, needs to be understood more generally in terms of dynamics, as a principle of mobility, communication and exchange of matter and spirit as well as of thought and feeling.”

The 17th century: A crucial time of changes

Why focus on the 17th century?  Because the century was a powerfully pivotal period as scientific development grew and challenged the place of magic and pseudoscience governing people's understandings of how the world works.

The 17th century was a time of intense scientific development, and as science ascended, many things previously given mystical explanations could be explained with science instead.

Consider the attraction of iron to a lodestone.  That attraction, Lobis says, was "the occult quality par excellence" until the advent of  Newtonian gravitation--then it was "no longer needed to be viewed as a mystical unknowable but rather could be analyzed and understood in terms of matter in motion."

University of Notre Dame’s Laura Knoppers says Lobis’ discussion of the sources and complexities of sympathy brings an “important new lens to bear on major literary authors such as John Milton and Margaret Cavendish, with equally insightful readings of such later authors as James Thomson, Mary Shelley, and Nathaniel Hawthorne.”

Similarly, Abram Van Engen, in his study Sympathetic Puritans, hails Lobis as a leading scholar in the systematic study of sympathy's development as "a moral term guiding human relations."

Lobis' book opens with Shakespeare’s The Tempest, which gives us a portrayal of sympathy in its elemental, magical form, and then the author guides us in subsequent chapters —in addition to the writers named above—through the philosophies of a number of thinkers, including Plato, Thomas Hobbes, and Michel Foucault.

In the works of Milton and Hume, in particular, Lobis explores sympathy's philosophical and moral dimensions with a textual dexterity and authority reminiscent of Andrew Scull's studies of madness and insanity in Western Civilization and Andrew Solomon's treatment of depression, The Noonday Demon.

While much of Lobis’ analysis examines works of the literary world, he includes philosophical and political texts, which underscores another important message of his book with implications far beyond the 17th century.

When something is finally understood as being common to us all, internal, rather than given by a supernatural, exterior source, then the seeds of societal change—of a sense of equality—begin to grow, too.