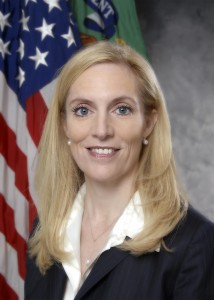 Dr. Lael Brainard, former Under Secretary of the Treasury for International Affairs and presidential nominee to the Federal Reserve Board of Governors, will deliver the keynote address at Claremont McKenna College's 67th Annual Commencement ceremony. The ceremony, honoring the Class of 2014, will be held at 2 p.m. on Saturday, May 17 on Pritzlaff Field.

Brainard has served as an important economic advisor to two presidents. She was nominated by President Barack Obama to serve as Governor of the Federal Reserve Board, following her recent service as Under Secretary for International Affairs at the Department of Treasury. In recognition for her work addressing financial stability during the Euro crisis, leading efforts with the G-20 on the global recovery, and serving as an important member of the negotiations over reforms in China's economy, Brainard was awarded the Alexander Hamilton Award.

Brainard previously served President Bill Clinton as Deputy Director of the White House National Economic Council and G-8 Sherpa, where she helped coordinate the response to the Mexican Financial Crisis and the Asian Financial Crisis and led efforts on development and trade. She served as Vice President of the Brookings Institution, where she built a new research program to address key global economic challenges. Brainard also was Associate Professor of Applied Economics at the MIT Sloan School of Management, where her research made important contributions to the debate on the relationship between offshore production, trade, and jobs and the measurement of structural and cyclical unemployment.

Brainard received her doctorate from Harvard University, where she was a National Science Foundation Fellow, and her bachelor's degree from Wesleyan University. She started her career in the private sector at McKinsey & Co.