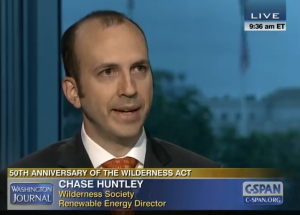 September 3, 2014 marks the 50th anniversary of the Wilderness Act, signed into law by President Johnson in 1964 to protect America’s most awe-inspiring wild places. In honor of the milestone anniversary, Claremont McKenna grad Chase Huntley ’98 appeared on C-SPAN on Aug. 23 to talk about the intricacies, effects, and importance of the Wilderness Act on 109 million acres of federally protected land.

Huntley refers to the conservation and upkeep of America’s wild places as an “almost nonpartisan issue” that has historically garnered strong bipartisan support in Congress. He defines wilderness as “the places we can escape from our daily grind,” places that are “essential escapes from the modern -day era.”

The Wilderness Act was one of the first truly successful endeavors to protect places where people can go “to find themselves, to renew, and to regenerate,” he says, and became a model for conservation efforts across the globe.

Huntley is the Renewable Energy Director for the Wilderness Society, and plays a role in discussing and evaluating public policy for sustainable energy production. He has extensive experience in policy analysis, and has served at the Government Accountability Office, on detail to the House Government Reform Subcommittee on Energy and Resources, and in the office of the Under Secretary of Agriculture for Natural Resources and Environment. He graduated with a B.A. from Claremont McKenna in government and philosophy, and holds two master’s degrees from the University of Michigan.