Contemporary Poetry Gets a Reading at the Athenaeum 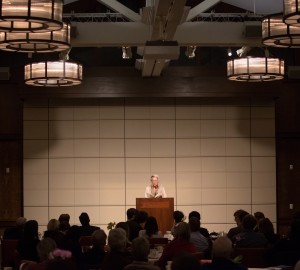 One of contemporary poetry’s leading voices, Sharon Olds, gave a reading of her work at the Athenaeum on Monday, Feb. 11. Her visit was sponsored by the Gould Center for Humanistic Studies.

Through several volumes of poetry, including One Secret Thing (2008) and Strike Sparks: Selected Poems 1980-2002 (2004), Olds has carved out a unique place in contemporary American poetry. Today, she is known for writing intensely personal, emotionally scathing poetry, which graphically depicts family life as well as global political events.

Olds has been the recipient of many awards, including fellowships from the Guggenheim Foundation and the National Endowment for the Arts, and the National Book Critics Circle Award. She was Poet Laureate of the State of New York from 1998 to 2000. Her most recent book, Stag’s Leap (2012), was awarded the T.S. Eliot Prize for Poetry.

In awarding the T.S. Eliot Prize, Carol Ann Duffy, chair of the final judging panel, said: “This was the book of her career. There is a grace and chivalry in her grief that marks her out as being a world-class poet. I always say that poetry is the music of being human, and in this book she is really singing. Her journey from grief to healing is so beautifully executed.”

“I’ve had a wonderful day today, and I love the atmosphere at CMC,” Olds told her local audience. The proceedings differed slightly from other Athenaeum events, in that Olds read from her work for 20 minutes, took questions for the same amount of time, and then finished up with another 20 minutes reading more of her verse.

In all, Olds––in a voice as calming and reassuring as a late-night jazz radio DJ––read 16 of her poems culled from several of her books. They included several “Odes” to various parts of the female genitalia that were more gently humorous than shocking. The same could be said for Olds’ own editorial comments after each poem.

“Where is this child from,” she said self-mockingly and slightly astonished at her own literary audacity. “Was she raised by wolves?”

“I would like to put lines down in such a way as to feel each line, but also the poem as a whole,” she said during the Q&A session. “At the same time, when I’m done reading a poem, it’s one person who wrote it and one person––me––reading it; a very intimate experience.”

An admitted “formalist” who thought she was writing free verse until she learned better at the age of 55, Olds said several things invoke her creative muse: her students in New York University’s graduate writing department; anyone and everyone she’s loved; any process of healing; dance, music and painting; and the woods in New Hampshire and New York City.

According to Javed Jasani ’13, a literature major who also attended an afternoon discussion with Olds, her poetry is honest.

“Stag’s Leap is all about the breakup with her husband,” Jasani said. “There is understandable bitterness and anger in the verse, but it’s also conscientious in that she’s cognizant of her husband’s feelings, which I thought was extraordinary.”

Indeed, in a review of her work, The Guardian praised Olds for always confronting “the personal details of her life with remarkable directness and honesty … wrestling with the ideas of right and wrong, full of symbolic possibilities.”

Ms. Olds is currently the Erich Maria Remarque Professor of English at New York in the Graduate Creative Writing Program and helped to found the NYU workshop program for residents of Goldwater Hospital on Roosevelt Island, and for veterans of Iraq and Afghanistan.