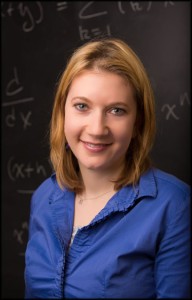 Assistant professor of mathematics Deanna Needell has been awarded a prestigious, five-year National Science Foundation CAREER grant of more than $413,000, for her research on the practical application of compressive signal processing (CSP). The grant, from the NSF’s Faculty Early Career Development Program, supports junior faculty who exemplify the role of teacher-scholars through outstanding research, excellent education, and integration of education and research within the context of the mission of their organizations.

Professor Lenny Fukshansky, chair of the mathematics department at Claremont McKenna, says the CAREER grant is notoriously difficult to obtain. “In Deanna's case,” he says, “it is clearly well deserved and comes not as a surprise, but as yet another sign of recognition of her impressive research activity in the booming interdisciplinary subfield of Applied Mathematics called Compressed Sensing. Just five years after earning her doctorate, she has already made some fundamental contributions to this active research area, and has confidently established herself as one of the scientific leaders in her generation.”

Compressive signal processing (CSP) is a new and growing field of mathematics that attempts to resolve inefficiencies of traditional signal acquisition. Needell’s work in this area imposes novel approaches to CSP, and has implications for technologies currently unable to harness the power of compressive signal processing. These include, but are not limited to, video surveillance, face recognition, latent semantic indexing, and radar accuracy.

“Compressed sensing is a piece of a complicated puzzle that will help us deal with the large-data crisis,” says Needell, who will use the NSF grant to fund summer research support, student research assistants, travel, and equipment. “There is an abundance of data, so much and so large, that we simply do not have the capacity to store it all, much less analyze it in an effective way. We need a way to reduce the dimension, or compress such data. For example, if you photographed a night sky, it’s pretty clear that the intrinsic information of that image is fairly small; you really only need to know where the stars are.”

“Those require deep mathematical tools,” she says. “And imaging is only one application of many. In today’s world we are inundated with large data, and absolutely must find scientific advances to handle it.” Compressed sensing provides a mathematical framework to tackle this problem. Its goal is to provide a mathematical theory that shows how and when the critical information in large-scale data can be acquired and analyzed using far fewer samples, measurements, and/or memory than its size suggests.

The Problem with Traditional Sampling Needell explains how in many applications, information is acquired about a particular object in a process called “sampling,” used–– among many examples–– in medical imaging, music recording, and radar. Digital cameras are another example of technology that uses sampling, for which a CCD array samples a real-life image.

“Most people assume a higher pixel count means a higher quality camera,” Needell says. “But what they may not realize is that the majority of the captured pixels are discarded as the camera compresses the image for storage.

“So why do we go through all the work of acquiring the entire image, just to throw most of it away?” Needell asks. “This simple observation leads to important questions about traditional sampling and acquisition methods: Do we really need to take so many samples? Can we create a single sampling process that only captures the important information?

How Compressive Sampling May be a Solution Needell says the field of compressive sampling aims to resolve this dilemma through the idea of dimension-reduction–– meaning the size of a compressible object could be reduced without sacrificing most of its information. Says Needell: “Imagine a digital camera in which you place a very fine grid over the image you want to photograph. A photon detector at each grid point measures the light intensity at each point; in fact, this is the notion behind a high pixel camera,” she says. “Clearly, you’d need a lot of grid points to capture the image accurately.”

Needell says now picture instead a much coarser “grid” with far fewer grid points, distributed randomly across the image. And imagine that–– by use of a “single” photon-detector–– the sum of the light at each of the points could be measured.

“Suppose we measure such a sum several times, for different random distributions of the grid points,” Needell says. “It turns out that using randomness in this way allows us to use a single-photon detector and take far fewer measurements than traditional digital cameras, without sacrificing an accurate image. This is very important, because in other types of cameras, such as infrared cameras, or those used in medical imaging, the cost of each measurement can be extremely high.”

Testing New Technology Needell says an exciting application of compressive sampling has been implemented in a “single-pixel digital camera” at Rice University. Even more exciting, she says, is that Stanford Medical Center is currently testing her compressive sampling technology in pediatric Medical Resonance Imaging (MRI).

“Currently, we can dramatically reduce the scan time of an MRI–– from 45 minutes to eight minutes–– without sacrificing image quality,” Needell says. “This is significant, especially in the pediatric setting, when a young patient may not be able to remain still or tolerate sedation.

The MRI application of this research is exciting to Needell, who recently met a neurosurgeon from UCLA. “Not knowing what I did for a living, he shared his frustration about the inability to get a good MRI of a particular area of the brain.

“We ended up having a long conversation,” said Needell, who says she will follow up with the physician this summer. “This technology could lead to decreased costs, reduced sedation, less power consumption, and more accurate diagnosis,” she says, “all through the power of beautiful mathematics.”

Needell earned her Ph.D. from the University of California, Davis and joined Claremont McKenna in 2011. Her research interests include numerical analysis, geometric functional analysis, statistics, probability, applications to computer science, scientific computing, and–– in particular–– the field of compressed sensing.

Earlier this year, she won an Alfred P. Sloan Research Fellowship, given to early-career scientists and scholars of “outstanding promise,” in recognition of distinguished performance and a unique potential to make substantial contributions to their field. In 2013, she was the recipient of a Simons Foundation Collaboration Grant for Mathematicians. She is co-organizer of Claremont McKenna’s Math Club.

“In addition to being an extremely strong young mathematician, Deanna is also a great mentor to undergraduate and graduate students, and is a wonderful colleague,” Fukshansky says. “She’s already made lasting contributions to our department, to CMC, and to The Claremont Colleges at large. The news of this landmark grant, previously awarded to mathematics colleague Mark Huber while he was at Duke University, once again underlines the extraordinary strength of our department.”